Algae are simple plants that can range from the microscopic (microalgae), to large seaweeds (macroalgae), such as giant kelp more than one hundred feet in length. Microalgae include both cyanobacteria, (similar to bacteria, and formerly called “blue-green algae”) as well as green, brown and red algae. (There are more varieties of microalgae, but these are the main ones.)
Algae can be grown using water resources such as brackish-, sea-, and wastewater unsuitable for cultivating agricultural crops. When using wastewater, such as municipal, animal and even some industrial runoff, they can help in its treatment and purification, while benefiting from using the nutrients present.
Most microalgae grow through photosynthesis – by converting sunlight, CO2 and a few nutrients, including nitrogen and phosphorous, into material known as biomass This is called “autotrophic” growth. Other algae can grow in the dark using sugar or starch (called “heterotrophic” growth), or even combine both growth modes (called “mixotrophic” growth).


Algae are very diverse and found almost everywhere on the planet. They play an important role in many ecosystems, including providing the foundation for the aquatic food chains supporting all fisheries in the oceans and inland, as well as producing about 70 percent of all the air we breathe.

Algae cultivation is an environmentally friendly process for the production of organic material by photosynthesis from carbon dioxide, light energy  and water. The water used by algae can be of low quality, including industrial process water, effluent of biological water treatment or other waste water streams. 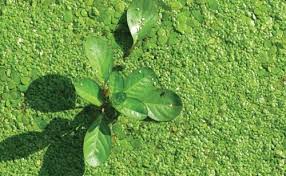 The open systems, in order to increase their efficiency, are generally designed as a continuous culture in which a fixed supply of culture medium or in fluent ensures constant dilution of the system. The organisms adapt their growth rate to this dilution regime, with the organism best adapted to the environment prevailing in the system winning the competition with the other organisms.
A drawback of the common open algae culture systems is the major risk of contamination by undesirable photosynthetic micro-organisms which can be introduced via air or rain.
Fig. The central role of micro-algae in mariculture

An alternative to the drawback of the open system could be to carry out algae cultivation in closed photo bio-reactors  In these, the process conditions can be accurately controlled, and no infection carrying alga species will occur. A major drawback of the closed photo bio-reactors resides in the high investment costs which lead to high production costs.

Algae reproduce very quickly and need only sunlight (or another form of energy, like sugar), water, carbon dioxide and a few inorganic nutrients to grow.

Autotrophic microalgae are cultivated on land in large ponds, or in enclosed so-called photobioreactors, using enriched CO2. The CO2 can come in the form of flue gases from power plants or be obtained from other fossil fuel combustion and biological processes. They thus can help recycle this specific greenhouse gas, and can help reduce greenhouse gas emissions overall when the algal biomass is converted into biofuels.
Heterotrophic microalgae are grown in large fermenters using sugar or starch, similar to the corn ethanol fermentation already providing almost 10 percent of our liquid transportation fuels.
Seaweeds (macroalgae) are cultivated in seawater, typically in near-shore systems, though open ocean cultivation has been studied in the past and is again of interest, and even on-shore cultivation of seaweeds is a possibility.
Algae can reproduce very rapidly, faster than any other plants, and there are tens of thousands of species of algae, with more constantly being discovered.

Benefits
Algae are emerging to be one of the most promising long-term, sustainable sources of biomass and oils for fuel, food, feed, and other co-products. What makes them so attractive are the large number and wide variety of benefits associated with how and where they grow.
Nearly all these benefits stem from the fact that these plants have evolved over billions of years to produce and store energy in the form of oil, and they do this more efficiently than any other known natural or engineered process.

Here are 10 reasons why algae are a promising new source of fuel and other products:

1) Algae Grow Fast
Algae can double their numbers every few hours, can be harvested daily, and have the potential to produce a volume of biomass and biofuel many times greater than that of our most productive crops.

2) Algae Can Have High Biofuel Yields
Algae store energy in the form of oils and carbohydrates, which, combined with their high productivity, means they can produce from 2,000 to as many as 5,000 gallons of biofuels per acre per year.

3) Algae Consume CO2
Like any other plant, algae, when grown using sunlight, consume (or absorb) carbon dioxide (CO2) as they grow, releasing oxygen (O2) for the rest of us to breathe. For high productivity, algae require more CO2, which can be supplied by emissions sources such as power plants, ethanol facilities, and other sources.

4) Algae Do Not Compete With Agriculture
Algae cultivation uses both land that in many cases is unsuitable for traditional agriculture, as well as water sources that are not useable for other crops, such as sea-, brackish- and wastewater. As such, algae-based fuels complement biofuels made from traditional agricultural processes.

5) Microalgal Biomass Can Be Used for Fuel, Feed and Food
Microalgae can be cultivated to have a high protein and oil content, for example, which can be used to produce either biofuels or animal feeds, or both. In addition, microalgal biomass, which is rich in micronutrients, is already used for dietary supplements to advance human health.

6) Macroalgae Can Be Grown in the Sea
Macroalgae (seaweeds) are grown in the sea, or even on land with seawater, and their sugars can be converted into biofuels and chemicals.

7) Algae Can Purify Wastewaters
Algae thrive in nutrient-rich waters like municipal waste waters (sewage), animal wastes and some industrial effluents, at the same time purifying these wastes while producing a biomass suitable for biofuels production.

8) Algal Biomass Can Be Used as an Energy Source
After oil extraction, the remaining algal biomass can be dried and “pelletized” and used as fuel that is burned in industrial boilers and other power generation sources.

9) Algae Can Be Used to Produce Many Useful Products
Algae can be cultivated to produce a variety of products for large to small markets: plastics, chemical feedstocks, lubricants, fertilizers, and even cosmetics.

10) The Algae Industry is a Job Creation Engine
Algae can grow in a wide variety of climates in a multitude of production methods, from ponds to photobioreactors to fermenters, and thus will create a wide variety of jobs throughout the United States, from research to engineering, from construction to farming, from marketing to financial services. The Algal Biomass Organization projects the potential for creation of 220,000 jobs in this sector by 2020.

The focus of today’s algae industry is on bringing the advances of science and technology for the production of algae products into the marketplace. These efforts are proceeding quickly, primarily driven by those that recognize algae’s high per-acre-yield and its suitability for making a variety of different products, from the small volume high value to the large volume commodities such as fuels and feeds.
In recent years, the number of algae research projects and companies in the US has increased by more than an order of magnitude, with many, if not most, focused on biofuels production. Overall investments into this space, private and public, exceed two billion dollars. This growth trend is now playing out globally. Many companies believe they are only a few years away from commercial production.

Commercial Production
Demonstrations of large-scale algae biofuels production have already occurred. Over 8 tons of algae biomass have been produced at Cellana’s six-acre Kona Demonstration Facility (pictured above) for testing in biofuel and other applications.  Thousands of gallons have been manufactured by fermentation for the US Navy as it develops a “green fleet” that can operate on domestically-produced alternative fuel. Pilot plants are slated to go online in Florida, Hawaii, Iowa, and elsewhere in the country throughout 2012.
In recent months, algae companies have had many achievements in the area of commercial production. In mid-2011, for example, Sapphire Energy broke ground on a 300 wet-acre project in Columbus, New Mexico that will begin operations in 2012, and produce 1 million gallons of algae biofuels per year when it reaches full capacity. Phycal, Inc. has been awarded a grant from the US DOE to help support its purchase agreement from the Hawaii Electric Company to supply algae-based fuel for power generation.


New Markets
The future of algae production will be determined by the size of the market it serves. Several initiatives are underway to support a strong marketplace for algae fuels in the hopes that this will accelerate true commercial production.
One of the earliest large markets for algae biofuels has been the US military. The US Navy is building a “Green Fleet” that will need domestically-produced biofuels, and the Departments of Energy, Agriculture, and US Navy are plowing $510 billion over three years into research and commercial production efforts.
Beside fuel, demand for other algae-derived products is growing as well. In 2010 only 9-13 percent of chemical sales were bio-based, a segment that is expected to grow to 22-28 percent of total chemical sales by 2025.That translates in to a market size of $483-$614 billion.
But the big market will always be fuel. And the upshot for algae here is that fossil fuel prices have been on the rise for decades, with no let-up in sight.

Microalgae are currently cultivated commercially for human nutritional products around the world in several dozen small- to medium-scale production systems,
producing a few tens to a several hundreds of tons of biomass annually. The main algae genera currently cultivated photosynthetically (e.g. with light energy) for various nutritional products are Spirulina, Chlorella, Dunaliella and Haematococcus . Total world production of dry algal biomass
for these algae is estimated at about 10,000 tons per year. About half of
this produced takes place in mainland China, with most of the rest in
Japan, Taiwan, U.S.A., Australia and India, and a few small producers in
some other countries.  Microalgae biomass is also produced for live
aquaculture feeds in systems that individually produce from a few
kilograms to a few tons of biomass annually. Microalgae flourish in
municipal wastewater treatment ponds, where they perform a waste
purifying function , but harvesting of the algal biomass is generally not practiced, and where it is the chemical flocculants used to remove the algal cells limit further uses of the algal biomass, even for biofuels (e.g. anaerobic digestion for methane generation). 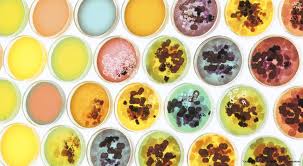