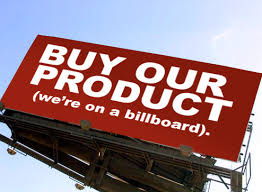 For most people, the most noticeable advertisements they see everyday are in billboards put up in high traffic areas. The billboards may stand close to the ground or sit high up on buildings.

Once you’ve built or put up one for someone, you only have to stand back while that billboard makes money for you months and months on.

What are a billboard and a billboard advertising business?
A billboard (sometimes also called a hoarding) is a large outdoor advertising structure (a billing board), typically found in high traffic areas such as alongside busy roads. Billboards present large advertisements to passing pedestrians and drivers. Typically showing large, ostensibly witty slogans, and distinctive visuals, billboards are highly visible in the top designated market areas. Bulletins are the largest, most impactful standard-size billboards. Located primarily on major highways, expressways or principal arterials, they command high-density consumer exposure (mostly to vehicular traffic). Bulletins afford greatest visibility due not only to their size, but because they allow creative "customizing" through extensions and embellishments.
Nothing beats the level of visibility that advertising on a billboard can bring. For a relatively small investment, a company can get years of visibility, with thousands of potential consumers viewing the ad each day. Starting a billboard advertising business could prove lucrative. However, due to the Highway Beautification Act, there are a number of regulations that may affect your business. Understand the financial cost and legal ramifications first to ensure profitability.

Following are the steps to set up a billboard advertising business –

Step 1
Research local billboard advertising rates and compare them against anticipated business expenses, such as insurance, billboard construction, lighting costs, permits and taxes to ensure profitability. Expect to charge about $800 to $5,000 per month, or $200 to $300 per month in a small town, depending on the visibility and type of billboard. According to Frank Rolfe of Nuwire Investor, your ground rent should not exceed 20 percent of your revenue.

Step 2
Contact local zoning authorities to learn the legalities governing billboards in your county and surrounding counties. Electronic signs may be prohibited in certain areas due to their light emissions. They also may have strict guidelines on the display time duration between each ad. You may be required to obtain a permit from your state’s department of transportation.

Step 3
Collect maps of the local area and begin plotting ideal locations for your billboards, such as off of highways or busy roads. The further out of town you go, the cheaper you can expect the rent to be. While you won’t be able to charge as much for your billboard as you would for one better situated, as the city expands, eventually your billboard may get great visibility. Alternatively, you can opt to purchase billboard signs, ground leases and permits from established companies. Find these companies online.

Step 4
Consult with a lawyer prior to signing any leases to help you draw up the contract. Determine the percentage going to the property owner. When developing contracts for your clients, detail the duration of the ad, design specifications, your maintenance responsibilities and penalties for breaking the contract.

Step 5
Hire a billboard company to construct your billboard. LED billboards are a popular option. Otherwise, vinyl billboards are a cheaper alternative. However, an electronic billboard allows you to advertise more than one company at a time, potentially increasing the revenue that can be earned from one billboard. At the same time, advertisers may not wish to share an electronic billboard, which changes ads every 10 seconds. Gain feedback by interviewing local business owners.

Step 6
Invest in graphic software, such as Photoshop, if you have design skills, or hire a graphic artist to work with clients in designing the billboards signs. Create a sample book of your designs to present to potential clients. Develop short, succinct, colorful, bold, eye-catching signs that drivers can’t miss.

One of the most effective forms of advertising is advertising on billboards along highways and areas where traffic is thick. Since advertising is a mainstay as long as people continue to manufacture, and sell products, a billboard advertising business will always be a viable business. The profit potential for this business is high – more than 50% (from $1,000 to $8,000 per month) and the return on investment is less than a year, even as short as four months!
So how do you start a billboard advertising business?
First make sure that you have experience in advertising. This is not an easy business to start as advertising is an entire field in itself. It encompasses not only idea generation but printing, and construction as well. So if you want to start this business, make sure you have enough experience or gain experience first by studying and working for a large advertising business.
Establish relationships with other contractors whose services you will be needing in order to come up with billboards for your customers. You need to find a printer who will accept ad printing jobs (text and graphics most often printed on vinyl); LED makers; electrical companies that will install connections to power source; and construction companies that will build the frames, catwalks and support for your billboards.
Obtain lease agreements with the owners of the spaces on which you will erect billboards.
Know the zoning regulations in the areas you plan to put up the billboards. You could not just put up signage anywhere and without the permission of the local and federal authorities.
Know all the regulations relating to billboards and of putting them up. There are standards sizes prescribed by the law and there are permits to obtain before you can put them up on sites.
Come up with ad rates and standard contract time. Will you have one year contracts or three year contracts?
Be ready to spend for insurance and reserve cash for repairs in case a billboard is damaged or destroyed by wind, hurricane, flood or other calamities that might befall it. Also, you will be spending for electricity to light the billboards at night.
Billboards are used to deliver short, punchy messages to the public in outdoor venues. Most frequently located along highways, they are marketing that is targeted to drivers. Because people are speeding past and see the billboard for only a few seconds, its message must be brief, easily understood and compelling.

Words
Words on a billboard need to be big, brief and clear. Prolonged explanations of products are not legible, and people will not put any effort into reading them. Wordplay that utilizes catchy phrases works well on billboards. A classic advertising campaign to encourage seat belts used the phrase "Buckle Up." This could be read in a fraction of a second but conveyed its message clearly. The Coca-Cola company had billboards in mind when it created what may have been the most minimal slogan in advertising history: "Coke Is It."

Color
Billboards are most effective when they stand out from their surroundings. An urban billboard that is the same color as surrounding buildings gets lost in the visual confusion. Brightly colored billboards, particularly those with color that is relevant to the product being advertised, can be very effective, such as a billboard for paint that featured an enormous paint can spilling "paint" down the billboard and all over the building and parking lot below it. Primary colors convey simple messages, and their brightness stands out from more visually complex surroundings.

Optical Illusions
Advertisers go to great lengths to capture the attention of the consuming public -- even to the extent of creating illusory images that play with the concept of the billboard itself. Some billboards may have mannequins attached to them to mimic people trying to reach the product. A particularly creative billboard for a vacuum shows a picture of a giant vacuum nozzle pointed upwards and a real, deflated hot air balloon draped over the billboard -- making it appear that the vacuum has sucked it from the sky.

Humor
Humor entertains viewers and makes messages more memorable. Billboard humor may be gentle, biting, absurd or slapstick. An example of product-specific humor is an image of Ronald McDonald visiting a Burger King in a trench coat and hat, sending the message that even the symbol of McDonald's prefers to eat at Burger King. Another amusing billboard features three-dimensional muffins in a giant pan, one of which has fallen out and crushed a car below it.