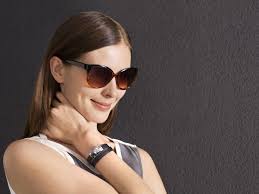 What is a GPS  ?
GPS stands for Global Positioning System . A GPS system goes inside of a car to help people with directions while they are driving. Man people rely on their GPS systems to get them around the city when they are driving.
GPS was originally intended for military applications, but in the 1980s, the government made the system available for civilian use. GPS works in any weather conditions, anywhere in the world, 24 hours a day. There are no subscription fees or setup charges to use GPS.
Whenever you rent a car with a navigation system, you are utilizing GPS. GPS is made possible by satellites that circle the earth and transmit signals indicating the position of physical features such as mountains, buildings and roads. Different regions of the world have their own satellites, but there is now a cooperative effort under way to coordinate the various services so that they are universally useful.
A new line of jewelry from Cuff is equipped with tiny wireless chips that link

to a smartphone app via Bluetooth. Pressing on the jewelry in case of

emergency sends an alert and your location to pals in your 'Cuff circle.'

How it works
GPS satellites circle the earth twice a day in a very precise orbit and transmit signal information to earth. GPS receivers take this information and use triangulation to calculate the user's exact location. Essentially, the GPS receiver compares the time a signal was transmitted by a satellite with the time it was received. The time difference tells the GPS receiver how far away the satellite is. Now, with distance measurements from a few more satellites, the receiver can determine the user's position and display it on the unit's electronic map.

A GPS receiver must be locked on to the signal of at least three satellites to calculate a 2D position (latitude and longitude) and track movement. With four or more satellites in view, the receiver can determine the user's 3D position (latitude, longitude and altitude). Once the user's position has been determined, the GPS unit can calculate other information, such as speed, bearing, track, trip distance, distance to destination, sunrise and sunset time and more.
“Cuff” is a Line of GPS-Enabled Jewelry That Double as Safety Devices

If you’re a senior who lives alone, or a woman working second shift, it’s important to be concerned about safety. As anyone who watches the ID channel knows, danger can be lurking in plain sight. This isn’t to say that we should live in fear, but we should definitely be prepared. For those nervous about walking home alone at night, Cuff’s new line of GPS-enabled jewelry provides a stylish yet practical way to ensure that help is only a button-push away. Much more attractive than similar alert button devices, Cuff allows you to build your own inner circle of contacts via an app.

For those nervous about walking home alone at night, Cuff’s new line of GPS-enabled jewelry can give you some piece of mind and alert friends and family to your exact location. If you run into a dangerous or uncomfortable situation, you merely press your Cuff and a message will be sent to your protective circle so they know where you are in case of emergency. The GSP Cuff chip can be used with a variety of stylish jewelry and accessories like necklaces, bracelets or even key chains, so it won’t even look like you’re wearing a security device. Cuff was created to provide wearers a greater sense of safety, but can also be used to create connections between friends.

Cuff was started by Deepa Sood, former VP of Product  Development at Restoration Hardware, with help from her mother who encouraged her to launch the brand. Combination  safety device,wearable technology and chic jewelry, the Cuff  line offers a variety of ways to provide security in a stylish way.  Each piece of jewelry or accessory has a spot to slide in the  CuffLinc, which is a GPS-enabled chip that tracks the wearers  location.
The Cuff wearer sets up her “Cuff circle” or her protective  network via the iPhone app to connect with specific people. If the  wearer is in danger, has an emergency or needs assistance, he or she can press the CuffLinc for three seconds, which will send out an alert to everyone in the Cuff circle. The Cuff app can also be used to send alerts to certain people letting them know you need to contact them. And wearers of Cuff will never miss an alert, because it will vibrate when a notification has been sent out.
Cuff can be used in a variety of scenarios. It can be worn by children and parents so they can always find each other, by people who work or walk in unsafe areas, or even by people who are ill and might need assistance. The Cuff can also be used by groups of friends or family to improve improve their connections and feel closer to one another. Cuff starts out at $50 for a bracelet and goes up to $150 for the more stylish brass bracelets and necklaces.

Market Research Report- GPS Tracking and Navigation Market in India
The general notion of tracking subjects has resulted in the advent of Global Positioning System (GPS) as a major breakthrough that the world had witnessed. Though the technology has been adopted a lot earlier in the developed countries, India is fast catching up the trend. GPS has surfaced as a ubiquitous concept that looks at bringing the entire world into close proximity by connecting far-off subjects. The report begins with the introduction of concept of GPS along with a brief description of the types of tracking. It then goes on to describe the basic framework of the functioning of GPS through its work model. The different components that get synergized to form the GPS ecosystem are described in the following section. It is followed by market overview which can be segregated into the global and the Indian scenario respectively. The global market overview is elaborated with a general introduction as well as a market size by shipment and values. The global market is slated to increase at the rate of 25-30% and a prediction is stated till 2016. An overview of the Indian GPS market comes next wherein along with the understanding of the sector, the market size as well as a market structure is also presented. This is immediately followed by the differentiation of the GPS market into two primary heads. The focus then shifts towards the Geographic Information System (GIS) wherein a take on the concept of GIS along with the Indian market overview is rendered. The GIS market overview comes with the market size figures and the segments where it operates. The following sections speak about the product categories and the benefits associated with GPS in the country. The report then progresses towards implementation of GPS as a mobile phone technology and also deliberates on the modified version of technology that aims at ameliorating the usage for consumers.

Navigating open waterways without a marine GPS navigation system is almost unheard of in the day and age of advanced technology. Nearly a requirement for water voyages of any duration, marine GPS units can be found at numerous local retailers, as well as from online stores and marketplaces. With a little research and foresight, along with the information provided in this guide, shoppers should have no problem identifying the type of GPS unit and functions needed for any boating application. Choosing between a pricey, feature-rich, fixed-mount unit or a simpler, inexpensive handheld device is the first step to finding the right marine navigation system. Shoppers also need to carefully consider the type of boating they engage in, along with any required functions for the GPS. With a certain type of GPS unit in mind, shoppers can begin researching different models. Setting a budget and deciding on the most important features will help narrow the choices to a few top contenders. With a list of desired features and price points in mind, it is a matter of finding the unit that is both functional and easy to operate. Make sure the person who will be using the unit is comfortable operating it before committing to a particular GPS device. Whether taking a leisure trip around a large lake or a fishing trip on the open seas, having the right marine GPS unit will ensure a smooth voyage and safe return.
For more details:-