Now’s the time to clean out your freezer! Trust us, you’ll need the extra space to test these 14 grown-up popsicles, plus seven other refreshing adults-only treats we came across.

Fruity & Refreshing POPSICLE Cocktails. Perfect for Summer! SAY CHEERS! – To create a light spritzer, combine equal parts champagne & ginger ale. – For a fruity cocktail, go with 3 parts ginger ale to 1 part white rum or vodka. Add the popsicles to either version right before serving. They’ll dissolve into the drinks as guests enjoy them. No need for ice!


This recipe makes a classic strong margarita. If you want the "poptails" to be low-test instead of high-test, reduce the alcohol by half or double the other ingredients. If you want to make these pops without the alcohol at all, add the juice of 1 extra orange and an extra¼cup of filtered water. Pour into molds and freeze per the manufacturer's instructions. 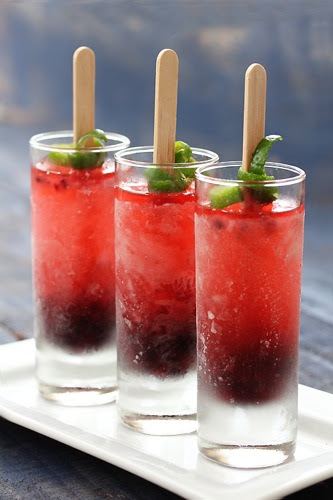 2 oz tangerine flavored vodka
¼ orange, segmented and diced into small pieces
Combine juice and vodka. Place 1 piece of orange chunk in the bottom of each popsicle mold. Fill the molds ¾ full. Freeze at least 3 hours, or until frozen. Yields 6.


Blend mangoes, rum, lime juice, and sugar until smooth. Add mint and water. Pulse until water is just blended into mixture and you can still see flecks of mint. Pour into molds and place popsicle sticks in the middle. Freeze. Yields 6.


Puree blueberries, wine, and simple syrup. Beat heavy cream and sugar in a cold bowl until soft peaks form; fold in beaten cream cheese. Portion out ¼ cup of cream cheese mixture into a separate bowl, combine with graham cracker crumbs. Place mixtures into 3 separate plastic bags and cut off a corner to create a small opening. Pour 2 tablespoons of blueberry and wine mixture into each well. Squeeze a tablespoon of cheesecake mixture on top of blueberry layer. Squeeze a small dollop of graham cracker mixture on top of cheesecake mixture. Continue layering until top of each well is reached. Cover top of popsicle form with foil and place popsicle stick in the center. Freeze overnight. Yields 8.
Simple Syrup Recipe
½ cup water

½ cup sugar
Place water and sugar in a saucepan over medium heat. Heat and stir until sugar dissolves. Cool before using.

Courtesy of Not Martha
1 orange (for serving)

Boozy Popsicles, or poptails as they are often called, are growing in popularity. It's no mystery why these fun, frozen treats make anyone look like an entertaining superhero with very little work. Use your favorite fruits or berries to make these your own. Easy to make but no compromise with taste. Today it is the most desirable cocktail with mix and match flavours of pops.
Posted by Prem Dubey at 01:54