What is Guar Gum?


Guar gum, also called guaran, is a galactomannan. It is primarily the groundendosperm of guar beans. The guar seeds are dehusked, milled and screened to obtain the guar gum.It is typically produced as a free-flowing, off-white powder.It can be described as a natural food thickener, similar to locust bean gum,cornstarch or tapioca flour. It is said to have significantly more thickening ability than cornstarch, at a fraction of the cost. This has made it a popular additive in products such as puddings and ice creams. Until recently, it was also an ingredient in non-prescription diet pills designed to create a sense of fullness.

The guar bean is principally grown in India, Pakistan, US, China, Australia and Africa. India produces 2.5 - 3.5 million tons of guar annually, making it the largest producer with about 80% of world production. 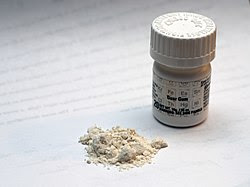 In India, Rajasthan, Gujarat and Haryana are the main producing regions, and Jodhpur, Sri Ganganagar and Hanumangarhin Rajasthan are the major Guar trading markets. Hanumangarh - Ganganagar  is the main production area for best quality guar beans, so called "Fast-Hydrating Guar".
The United States has produced 4,600 to 14,000 tonnes of guar over the last 5 years.As many as 50,000 acres of guar have been grown in West Texas over the last 50 years.

Guar Gum powder is manufactured by mechanical extraction from the guar seed endosperm which contains about 80% Galactomannan (gum).
The gum is made from the endosperms of the seed, recovered by hulling the seed and breaking away the endosperms, known as ‘splits’.
The product is traded in the form of splits or powder and, its value is judged by its viscosity, measured in centipoises units abbreviated to ‘cp’. Typically, high-viscosity guar has a higher market price.
Guar gum is obtained by an automatic mechanical process in which first the seed is split into two halves and the hull and the germ is mechanically scraped off to obtain endosperm. Refined guar splits are obtained by splitting the guar seed into two halves and dehusking and polishing the grains.
These splits are then pulverized and tailor made for usage in different industries. The endosperm thus obtained is further purified and grounded into powder of required granulation and viscosity.
After pulverization, sieving is done to get the required mesh.
The sieved gum is then passed through blenders to make it homogenous.
State-of-the-art plants are capable of producing several grades of guar gum ranging from very low to very high viscosity and from coarse to fine granulation.