Start a Business of Genetic Engineering


Start a Business of Genetic Engineering

Genetic engineering, also called genetic modification, is the direct manipulation of an organism's genome using biotechnology. New DNA may be inserted in the host genome by first isolating and copying the genetic material of interest using molecular cloning methods to generate a DNA sequence, or by synthesizing the DNA, and then inserting this construct into the host organism. Genes may be removed, or "knocked out", using a nuclease. Gene targeting is a different technique that uses homologous recombination to change an endogenous gene, and can be used to delete a gene, remove exons, add a gene, or introduce point mutations.
Genetic engineering alters the genetic make-up of an organism using techniques that remove heritable material or that introduce DNA prepared outside the organism either directly into the host or into a cell that is then fused or hybridized with the host. This involves usingrecombinant nucleic acid (DNA or RNA) techniques to form new combinations of heritable genetic material followed by the incorporation of that material either indirectly through a vector system or directly through micro-injection, macro-injection and micro-encapsulationtechniques. 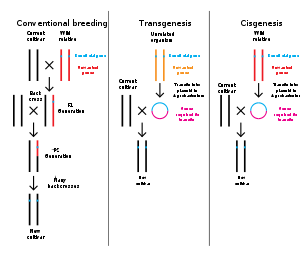 An organism that is generated through genetic engineering is considered to be a genetically modified organism (GMO). The first GMOs were bacteria in 1973 and GM mice were generated in 1974. Insulin-producing bacteria were commercialized in 1982 and genetically modified food has been sold since 1994. Glofish, the first GMO designed as a pet, was first sold in the United States December in 2003.
Genetic engineering techniques have been applied in numerous fields including research, agriculture, industrial biotechnology, and medicine. Enzymes used in laundry detergent and medicines such as insulin and human growth hormone are now manufactured in GM cells, experimental GM cell lines and GM animals such as mice or zebrafish are being used for research purposes, and genetically modified crops have been commercialized. 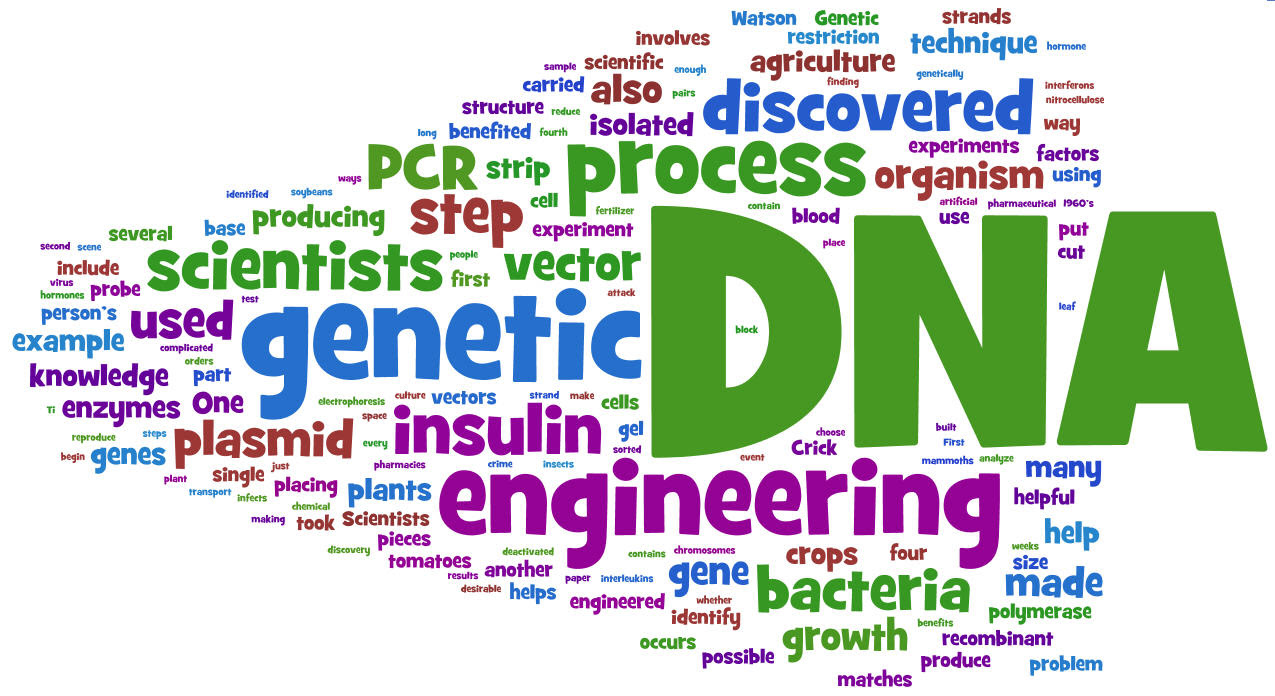 The first step is to choose and isolate the gene that will be inserted into the genetically modified organism. As of 2012, most commercialised GM plants have genes transferred into them that provide protection against insects or tolerance to herbicides. The gene can be isolated using restriction enzymes to cut DNA into fragments and gel electrophoresis to separate them out according to length. Polymerase chain reaction (PCR) can also be used to amplify up a gene segment, which can then be isolated through gel electrophoresis. If the chosen gene or the donor organism's genome has been well studied it may be present in a genetic library. If the DNA sequence is known, but no copies of the gene are available, it can be artificially synthesized.
The gene to be inserted into the genetically modified organism must be combined with other genetic elements in order for it to work properly. The gene can also be modified at this stage for better expression or effectiveness. As well as the gene to be inserted most constructs contain a promoter and terminator region as well as a selectable marker gene. The promoter region initiates transcription of the gene and can be used to control the location and level of gene expression, while the terminator region ends transcription. The selectable marker, which in most cases confers antibiotic resistance to the organism it is expressed in, is needed to determine which cells are transformed with the new gene. The constructs are made using recombinant DNA techniques, such as restriction digests, ligations and molecular cloning.The manipulation of the DNA generally occurs within a plasmid.
The most common form of genetic engineering involves inserting new genetic material randomly within the host genome. Other techniques allow new genetic material to be inserted at a specific location in the host genome or generate mutations at desired genomic loci capable of knocking out endogenous genes. The technique of gene targeting uses homologous recombination to target desired changes to a specific endogenous gene. This tends to occur at a relatively low frequency in plants and animals and generally requires the use of selectable markers. The frequency of gene targeting can be greatly enhanced with the use of engineered nucleases such as zinc finger nucleases,engineeredhoming endonucleases, or nucleases created from TAL effectors. In addition to enhancing gene targeting, engineered nucleases can also be used to introduce mutations at endogenous genes that generate a gene knockout.
Application

Genetic engineering has applications in medicine, research, industry and agriculture and can be used on a wide range of plants, animals and micro organisms. 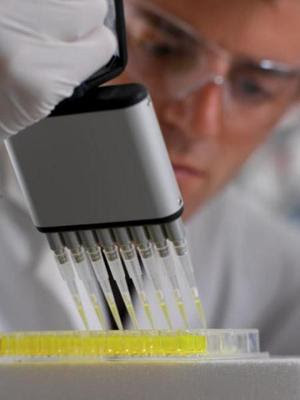 In medicine, genetic engineering has been used to mass-produce insulin, human growth hormones, follistim (for treating infertility), human albumin, monoclonal antibodies, antihemophilic factors, vaccines and many other drugs. Vaccination generally involves injecting weak, live, killed or inactivated forms of viruses or their toxins into the person being immunized. Genetically engineered viruses are being developed that can still confer immunity, but lack the infectious sequences. 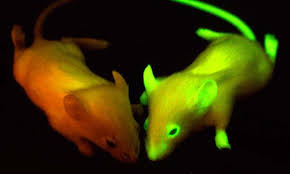 Genetic engineering is an important tool for natural scientists. Genes and other genetic information from a wide range of organisms are transformed into bacteria for storage and modification, creating genetically modified bacteria in the process. Bacteria are cheap, easy to grow, clonal, multiply quickly, relatively easy to transform and can be stored at -80 °C almost indefinitely. Once a gene is isolated it can be stored inside the bacteria providing an unlimited supply for research

Using genetic engineering techniques one can transform microorganisms such as bacteria or yeast, or transform cells from multicellular organisms such as insects or mammals, with a gene coding for a useful protein, such as an enzyme, so that the transformed organism will overexpress the desired protein. One can manufacture mass quantities of the protein by growing the transformed organism in bioreactor equipment using techniques of industrial fermentation, and then purifying the protein. 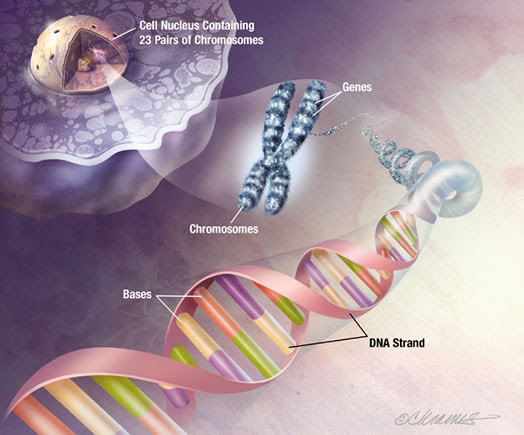 Good genes aren't always a matter of luck. Sometimes, they're the work of genetic engineers. Genetic engineering, or the scientific altering of DNA, is a subspecialty of biomedical engineering. On top of diverse career options, genetic engineers enjoy above-average incomes and job opportunities. Genetic engineers earned a median annual income of $84,760 as of May 2011, according to the Bureau of Labor Statistics, with projected job growth of at least 29 percent from 2010 to 2020.
Genetic engineers who choose careers in human health focus on treatment of chronic illness. They developed genetically engineered insulin for diabetes patients in the 1980s, and have since created genetically engineered clot-busters to stop heart attacks, proteins and antibodies to fight cancer, vaccines for hepatitis B, hormones to halt anemia and antibodies to prevent organ rejections in transplant patients. Genetic engineers also turn otherwise harmful viruses or bacteria into messengers that carry therapeutic drugs to specific tissues. Genetic codes help them to uncover hereditary defects ranging from cystic fibrosis to hemophilia. Though many inherited conditions were not treatable as of 2012, genetic engineers are researching methods to fix faulty DNA codes. In the absence of treatments, genetic engineers report results of genetic testing to counselors who help patients prepare for potential diagnosis and treatment.

In 1980, the U.S. Supreme Court ruled that a genetically-altered micro-organism could be patented. With that door now open to profit, private genetic research soared.
Most people think positively about the advancements in biotechnology in areas like medicine, which is indeed a big part of the industry. Leading geneticists are hot on the trail to eradicating cancer and the latest in cloning has successfully grown body parts like the human ear. What this means for vital organ transplants is extraordinary.
As we step into 2010, biotechnology is common practice in a many of today’s industries.
Bio-fuels, based on plants like corn or animal by-products, are supplementing and, can actually replace, our dependence on oil and natural gas.
Gene therapy involves the replacement or repair of defective genes and may lead to a cure for cancer and many other diseases. Bio-identical hormones are helping women navigate through menopause and are in the lead for that fountain of youth formula we all hope for.

Genetic Engineering from a Laptop

Today we have the ability to do genetic engineering from a laptop, and Hessel is trying to inform and inspire a new generation of scientists who are willing to grasp the life-transforming potential of this powerful new tool.


The idea of engineering life artificially tends to conjure up images of unpredictable life forms that grow out of control, bringing harm and disease to the planet. But that’s the stuff of science fiction. According to Hessel, we should be more worried about electronic warfare and insidious hacking activities than synthetic life forms.
“I find computers far freakier than any living organism,” he says. “With most microbes, you wash your hands, bleach the counter, and they’re gone. But who’s going to turn off all the computers?”
Besides, biological information travels slowly, filtering through ecosystems, confronting at every step of the way the formidable human immune system and modern medical technologies that thwart its progress.
“To examine the flow of biological information, you start with the first person who catches a cold,” Hessel explains. “The spread of that new cold around the world takes months. That’s incredibly slow compared to a tweet, which can spread around the world nearly instantly. Compared to electronic information, I don’t think biological information has a hope.”
Hessel thinks of biological information in computer terms. Bacteria are processors; viruses are software; genomes are operating systems. And most importantly, human beings are programmers who create apps that add new features to existing genomes. “It doesn’t matter whether you engineer something or whether you evolve something,” he says. “You kind of end up at the same place.”
By programming living systems, Hessel suggests, we will reach into every single area where biology operates and change our planet: we will control the food supply, create new drugs and build renewable fuels. Grass will spread the internet everywhere it grows.
This utopia is not so far away. Genetic engineering has brought us to a point where we can think about bypassing natural selection to create our own species in the environments we choose. Hessel calls it a “parallel biology,” one that allows us to mix and match different organisms to generate synthetic offshoots of the tree of life.
“It’s completely outside of the Darwinian philosophy of incremental change,” Hessel says. “We basically throw all the old rules out, and now we get to apply human needs to it. And that’s pretty cool.”
As Google satellites reveal, we have already transformed the face of the earth through our technological advancements. We just haven’t done it in the most intelligent fashion.
“We’re literally changing this entire planet by putting up buildings and creating gadgets with plastic and toxic materials,” Hessel says. “We’re doing it with stuff that isn’t very friendly to life. We’re putting living things to the periphery and we’re poisoning ourselves. I think we have to shift our thinking a little bit and start remembering that we’re living organisms and we have dependence that involves all the other living organisms on this planet.”
Hessel is exuberant about the biological possibilities that lie ahead. He says we should let fun and curiosity drive genetic research, not the narrow needs of markets. At the very least, we have to learn to think exponentially.
“If you think about taking 30 steps, you know exactly how far you’re going to go and where you’ll end up,” Hessel says. “But if you take 30 exponential steps, you’ve walked around the world over 10 times.” It’s a doubling factor that our brains can’t quite grasp because we are hardwired to conceptualize in linear fashion, moving steadily in one direction, rather than taking boundless leaps to wherever."
“Everything’s changing except our thinking, which is the slowest thing,” Hessel says. “When it comes to the rate of change in technology, human beings are the limiting factor.”