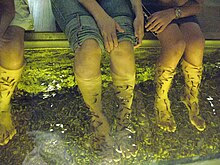 (319). Start a Fish Spa  Therapy Business
Dr. Fish / Garra Rufa Spa Therapy is a natural form of exfoliation and relaxation treatment that has been offered with amazing results. Doctor Fish™ have been known for softening and cleansing the skin of people who bathed in hot springs where the fish darted about.It sounds crazy, but don’t knock it until you try it – it is surprisingly fun. These normally vegetarian fish home in on areas of dry skin, especially around heels and soles of the feet and finger nails. For a psoriasis sufferer, the fish target the plaques — areas of sore, red and thickened skin.
Doctor Fish trend is made popular in Asia and has since been making the headlines in the lifestyle industry. The secret to natural beautiful skin is finally here!These Doctor Fishes (Garra Rufa) are put to work by nibbling on your skin removing dead skin cells through natural exfoliation! They have found that these tiny fishes secrete a ENZYME called diathanol which is said to improve skin regeneration!Now Imagine this, no more costly creams or products to obtain that smooth soft skin you've been wanting!The Doctor Fish Spa is a treatment which helps in the regeneration of the human skin through a natural and fun way using the Original Doctor Fish known as Garra Rufa. Most common concepts of this Doctor Fish treatment are done on the Hands & Feet also known as Fish Manicure & Fish Pedicure.
No they don’t and can’t bite, they don’t have any teeth. They suck, scrape and nibble the dead skin off your body, hands or feet.
Doctor Fish spas and skin treatment facilities are becoming more and more popular in countries like Japan, China, Turkey and across Europe. They use an amazing species of fish known as Garra rufa as a cosmetic beautifying treatment and as a cure for a variety of skin diseases. Garra rufa can be found in river basins around the Northern and Central Middle East, in countries like Turkey, Syria, Iraq and Iran, but it is now artificially bred in outdoor pools specifically for the spas.

As you read on, you will be uncovering more facts about Doctor Fish & the history of it's existence. Due to the popular demand of this treatment, we have gone to the extend to secure the Doctor Fishes to bring them to you! If you are looking for home setup or business setup, it must tell you its a very profitable business.

Doctor fish is the name given to two species of fish: Garra rufa and Cyprinion Macrostomus. Other nicknames include nibble fish, kangal fish,little dermatologists and doctorfishen; in non-medical contexts, Garra Rufa is called the reddish log sucker. They live and breed in the outdoor pools of some Turkish spas, where they feed on the skin of patients with psoriasis. The fish are like combfishes in that they only consume the affected and dead areas of the skin, leaving the healthy skin to grow, with the outdoor location of the treatment bringing beneficial effects. The spas are not meant as a treatment option, only as a temporary cure for symptoms, and patients usually revisit the spas every few months. Some patients have experienced complete cure of psoriasis after repeated treatments, but due to the unpredictable nature of the disease, which is strongly influenced by endogenous factors, this may simply be regression towards the mean.

Garra Rufa occurs in the river basins of the Northern and , mainly in , ,  and . It is legally protected from commercial exploitation in  due to concerns of overharvesting for export. Garra Rufa can be kept in an aquarium at home; while not strictly a "beginner's fish", it is quite hardy. For treatment of skin diseases, aquarium specimens are not well suited as the skin-feeding behavior fully manifests only under conditions where the food supply is somewhat scarce and unpredictable. In 2006, doctor fish spa resorts opened in Hakone, Japan, and in Umag, Croatia, where the fish are used to clean the bathers at the spa. There are also spas in resorts in China, such as Hainan, Belgium, The Netherlands, South Korea, Singapore, Slovakia, Surat(INDIA) and Malaysia. In 2008, the first widely known doctor fish pedicure service was opened in the United States by John Ho in Alexandria, Virginia and later in Woodbridge, Virginia, and has trademarked the treatment name of 'Dr. Fish'. The first Skin Therapy clinic using Garra Rufafish in Ireland (Limerick) was opened in 2008. These little dermatologists are used there to give relief to people with various Skin Disorders, including Eczema, Psoriasis and Dermatitis.


The so-called Doctor Fish spas first appeared in Turkey, where people suffering from a terrible skin disease called psoriasis, from all around the world started coming for treatment. Psoriasis sufferers develop raised red patches on their body covered by grey, scaly skin, which is sore or very itchy. Fortunately the Garra rufa love to nibble on dead and diseased skin and as soon as the patients insert their limbs in the water, an army of these little guys start eating away the skin thats been softened by the warm water. Doctor Fish can survive in waters as hot as 43 degrees Celsius, but nutrients cant and their not fed either, so when somebody dips their feet in their pool, its a real treat.

Specialists say Doctor Fish are not a cure for psoriasis, as the disease is influenced by many endogenous factors, but there have been cases when patients have been completely cured after several treatment sessions. But, in recent years, Doctor Fish spas have opened in Japan, China, Malaysia, South Korea or Singapore as local attraction and cosmetic facilities and less as skin disease facilities. If you enjoy taking care of your skin, you know that exfoliation is a pretty strong treatment that can only be performed once a year and only by a specialist. Thats because powerful chemicals are used, but with the help of the ravenous Doctor Fish you can say goodbye to your old skin and hello to a new healthy layer, smooth as a baby

How long does it take?
For a fish pedicure to treat feet the process will take about 10 – 15 minutes for each session. The number of sessions will depend on the skin condition. lt is often good practice to follow the fish pedicure with a massage to help further treat the skin.  Does it Hurt?No, it doesn’t hurt. You will feel a tingling sensation which many people find soothing and relaxing. This can be a little ticklish at first but you get used to it very quickly. This tickling sensation will also help promote better blood circulation.
What are the Benefits?
Doctor Fish are a fantastic way of looking after your skin. The most visible benefits are seen on people who have dry, rough or damaged skin. The fish naturally remove the dead or damaged skin leaving healthy skin to continue growing. The nibbling is a pleasant experience once the individual becomes used to the initial sensation.There is a symbiotic relationship between human beings and the natural environment in which we live. This fish therapy is a natural example of where a recreational experience provides therapeutic benefits on the skin. In addition to removing dead skin the fish pedicure is also able to remove dirt and provide a deep cleansing treatment to the skin. This in turn also helps new skin regeneration. After the treatment the skin will feel revitalized, smooth and healthy. Many people have reported that their skin has that natural glow once again! The skin has a revived elasticity and that fresh new feel.
What is the Process?
This fish therapy treatment is a very relaxing way to treat the skin. Removing layers of dead skin is part of the natural process of skin growth and this innovative treatment is enjoyable and therapeutic. The sensation of the fish massage stimulates nerve endings which in turn stimulate the nervous system in a similar way to acupuncture treatments which help relieve the body of tiredness and provide a form of relaxation.
Are there any side effects ?
This naturally occurring behaviour has been known to help treat various skin conditions with no side effects. Whilst no one would claim that the therapy is a natural cure to any one skin condition it is certainly a beneficial treatment. An enjoyable, comfortable and wonderful feeling during the nibbling process that can’t be described in words. It will bring no harm because of the tameness and gentleness of the fish.
Dr Fish Spa Therapy Startup Guide at  $49.95 is the resource for you.
What The Book Covers