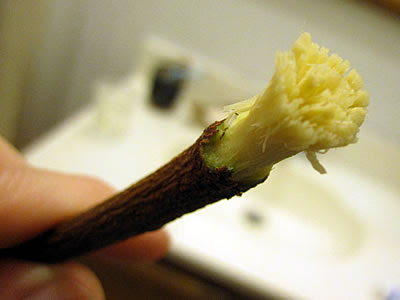 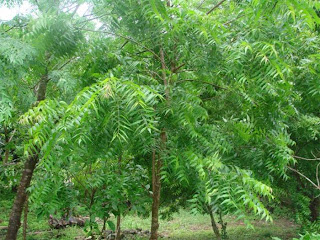 Earlier Neem twig (called as ‘Datun’ in hindi) was commonly used in India for cleaning teeth and oral health. Probably that is why even without so many dental care products (variety of tooth paste, mouthwash, floss) and dentists, people used to have much healthier teeth and gums.  Neem (Azadirachta indica) is widely known for its wide range of health benefits from its every part. It is popularly known as village pharmacy. Neem datun is chewed for a while in mouth which makes it a brush like stick that works as natural floss. Chewing releases extract that is bitter in taste but it is anti-bacterial. It protects teeth and gums by killing bacteria. It purifies blood and gets rid of bad breath. It has healing properties for any ulcers in mouth.Cavities, bleeding gums, plaque formation, and discoloration of teeth can all be checked by Neem datun. Neem can also protect from oral cancers.
Neem twig has lots of pharmacological properties and is used to manufacture oral care products. It is used to manufacture herbal toothpastes and powders. It has found mention in the early vedic texts, for being of immense importance in maintaining oral hygiene. A neem twig is considered a very effective natural or herbal toothbrush, while its fibres clean the teeth, its juice works both as a mouth freshener and has germ-killing properties. It has also been used for a long time now, for manufacturing organic manure. They are being grown and exported to countries for meeting different uses.

Use of Neem Twigs in Industries 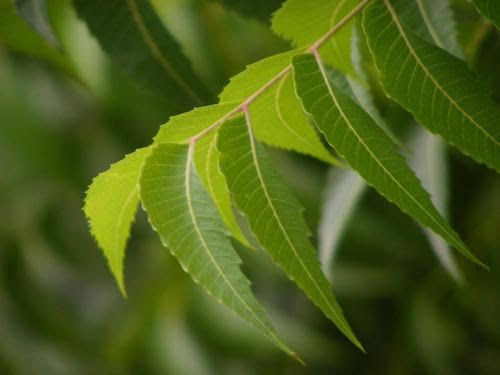 The market for neem is still in its developing stage, the economic and commercial viability is being studied and according to different reports published, neem and its parts can be used in different form to manufacture products for a number of industries.

Researchers believe that the use of neem toothbrushes is responsible for the bright smiles and healthy teeth of Indian villagers, people who never had access to any modern dental care facilities, products or fancy toothpaste.

For a proper neem toothbrush you need a young, flexible branch of a neem tree, about 15 to 20 cm long, and 15 to 20 mm thick. Such a twig won't have a real bark, just a thin skin. Peel that skin off.
Now chew one end of the stick. All the fibres will separate and the end will turn into a little brush.
The process of chewing the twig is already helpful. It releases the beneficial ingredients in neem that kill harmful bacteria, reduce inflammation, and stop bacteria and plaque from sticking to your teeth.

Then that brush is used to rub over all the sides of all teeth. Be careful not to injure the gums in the process. This is the part where you actually clean the teeth.
In the end you just spit out all the little bits of neem fibre. It doesn't taste real nice, by the way. Bitter.
The neem toothbrush is disposable, meant to be used only once. After cleaning the teeth the neem stick is split in half, and one end is bent into a U-shape and used as a tongue cleaner.
Removing the soft plaque from the anaerobic back of the tongue also makes a big difference in overall oral hygiene and levels of harmful bacteria, so don't overlook this aspect of using the neem toothbrush.

There you go, that's how you make and use a neem toothbrush the traditional way. I certainly believe that this traditional way of cleaning the teeth and the tongue is as least as effective as our modern methods.
Neem is not the only tree that is used in India for toothbrushes. In fact, different wood is recommended for different types of people and conditions. There is also a caveat: it is not recommended that you use a neem stick like that if you suffer from nausea, indigestion or a cough.
And, if you want to use a neem stick, you are also advised to consult an elder for advice first, or even for a demonstration. It's bit like in our society we say, "always consult a qualified medical practitioner"...
No, I'm not saying you should consult a doctor before you bite into a neem twig. I chew them all the time, so far with no ill effects ever.
But it's always good to remind ourselves that neem is very powerful, that we need to be informed, and that we have to use it responsibly and in moderation.