High quality banana fibre is used for making good quality paper and for blending in textile industry. You can start a business of extracting and weaving banana fibre. This business requires skills and good networking.

Banana fibre is eco friendly like jute fibre. The technology of banana fibre extraction has been developed in South India where in a good number of banana fibre extraction units have been running very successfully. Some firms are exporting the banana fibre products.
Banana growing states of N.E.Region has adopted the technology from South and started production of banana fibre and fabric.
MARKET POTENTIAL
The banana fibre is being used for weaving attractive pieces of clothes, rugs, sarees etc. Besides, it is also being used to produce a variety of items such as hats, photo frames, trinket boxes, gift bags, picture frames, hand bags, belts, baskets and sandals etc.
Dresses woven out of natural fibres are in great demand inside and outside India.
RAW MATERIALS
The main raw material for the unit is banana tree which is abundantly available in the State of Meghalaya, Mizoram, Arunachal Pradesh and Assam.
Total : 1.60 lakhs.
SUGGESTED LOCATION :
Banana growing areas in Assam, Meghalaya, Mizoram and Arunachal Pradesh.
PROCESS
Banana Fibre Processing and Weaving :
The extraction of the natural fibre from the plant required certain care to avoid damage. In the present experiments, initially the banana plant sections were cut from the main stem of the plant and then rolled lightly to remove the excess moisture. Impurities in the rolled fibres such as pigments, broken fibres, coating of cellulose etc. were removed manually by menas of comb, and then the fibres were cleaned and dried.
This mechanical and manual extraction of banana fibres was tedious, time consuming, and caused damage to the fibre. Consequently, this type of technique cannot be recommended for industrial application. A special machine was designed and developed for the extraction of banana fibres in a mechanically automated manner. It consisted mainly of two horizontal beams whereby a carriage with an attached and specially designed comb, could move back and forth. The fibre extraction using this technique could be performed simply by placing a cleaned part of the banana stem on the fixed platform of the machine, and clamped at the ends by jaws. This eliminated relative movement of the stem and avoided premature breakage of the fibres. Thiswas followed by cleaning and drying of the fibres in a chamber at 20oC for three hours. This fibres were then labeled and ready for lamination process.
After extraction of fibre, weaving is done in the looms as per normal process like any other material.
MACHINERY
The major equipment required are :
INFRASTRUCTURE
The major infrastructural requirement are :
TOTAL CAPITAL REQUIREMENT
The total capital requirement including fixed capital and working capital is estimated at Rs.1.70 lakhs as follows. Of this, the project cost comprising fixed capital and margin money on working capital is Rs.1.55 lakhs.

PROFITABILITY
Based on the sales realization of Rs 6.65 lakhs and the operating expenses of Rs 4.99 lakhs, the profit at rated capacity utilization would be Rs 1.66 lakhs per year. This works out to be return on investment of 98%. The unit will break even at about 31% of the targeted annual production.

The major highlights of the project are as follows :
SUPPLIERS OF MACHINERY
Addresses of Machinery and Raw Material Suppliers :
Supplier of Banana Fibre Extractor :
M/s Andhra Pradesh  Dev. Corporation,
Hydrabad
Looms and other accessories are available in the local market. 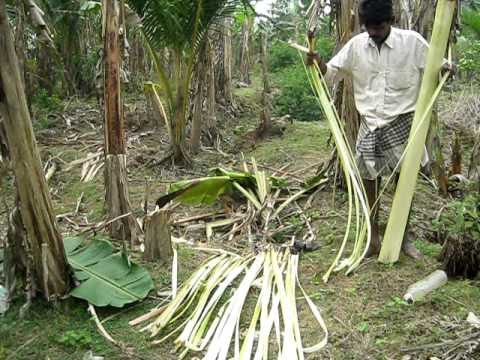 BANANA fibre extraction is emerging as a good business proposition in Tamil Nadu and Kerala following good demand for the fibre.

Especially, three hamlets off Marthandam in Tamil Nadu — Thakkalai, Thiruvattaru and Mathur — have become the centre for banana fibre wherein every household of the village is engaged in the fibre extraction activity eking out their livelihood.
``Manual fibre extraction from the banana pseudostem is an arduous task,'' says Ms Kalpana, a research associate at the National Research Centre for Banana (NRCB) at Tiruchi.
Ms Kalpana, who is engaged in a project on physiochemical and structural characteristic of banana pseudostem told Business Line that there was huge demand for the banana fibre, which was (blended with other natural fibres) used in making a wide range of goods as cordage, yarns, paper and paper cups, tea cups and tea bags, attractively patterned cloth, handbags/purses and shoes.
A tribute to the tear and tensile strength of banana fibre were the Japanese yen notes printed on paper from the fibre of the banana variety— abaca, she added.
``Because of the huge demand in the markets abroad, the pseudostem is not junked anymore,'' she said and pointed out that a kg of the fibre was bought locally only for about Rs 50. ``However, the maximum quantity of fibre that an individual can extract in a day would be just 500 g whereas in the mechanical process the same quantity could be extracted in an hour,'' she said.
Only wooden boards and metal scrapper are used in the manual fibre extraction process, Ms Kalpana said. NRCB had collaborated with a Mumbai-based research institute for developing a low cost mechanical device for the purpose.
According to her, over 5 lakh hectares of area were under banana in India, and the pseudostem alone would account for 28 million tonnes, from which the fibre, if extracted should weigh around 2.2 million tonnes every year. There are at least 117 different banana varieties. The fibre content in the wild varieties is said to be more.
She said that a survey conducted in the Nagercoil belt showed that four red banana plants could yield one kg of fibre as against 10 plants of the nendran variety. ``The fibre content is even less in commercial varieties like robusta.''