What is Bottled Air?

A gas cylinder or tank is a pressure vessel used to store gases at above atmospheric pressure. High pressure gas cylinder are also called bottles

If water can be bottled and sold, why not air? In 2009, bottled water was a $10.6 billion business that involved packaging 8.1 billion gallons in the U.S., according to Beverage Marketing Corp. in New York. But air is somewhat easier to find than a cold sip of water. Still, oxygen bars went through a mildly popular phase in the '90s, and seven or eight companies still market oxygen canisters to the action sports set. "It's pure oxygen," says Daniel Jungers, managing partner of Big Ox, a company in Springfield, Mo. "It increases the oxygen content in your blood and gives you a boost when you're tired or fatigued." Thus far there are no plans for pure mountain air in bottles, unless you're talking pure irony. A Hong Kong activist group protesting air quality in the city--reportedly three times as bad as New York City air--posted a video selling canned fresh air that instantly went viral this year.

I know this sounds improbable, but maybe we should also bottle air and get it out there on the supermarket shelves.
Now, I'm not talking about oxygen concentrators or other medical- use air, I mean regular air that we breathe in and out, day in and day out.
Think about it, before you brush off the idea, after all, we never thought people would buy water-- remember?
These days people seem to like the convenience of having fresh, clean water to quench their thirst at a moment's notice.
They think it is much fresher and cleaner than water they could get from a tap. They also think it is better for them.


It probably wouldn't be too hard to convince people that bottled air is also a necessity so they could instantly have fresh, clean air to breathe.
Chinese multimillionaire sells EIGHT MILLION 80-cent cans of fresh air in TEN DAYS as pollution levels climb to record highs.. 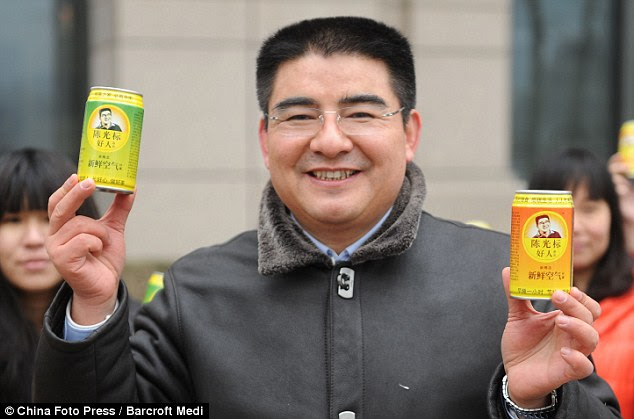 Cans of fresh air are up for sale in China as a multimillionaire looks to capitalize on the country's foulest fortnight for air pollution in memory.
Chen Guangbiao, who made his fortune in the recycling business and is a high-profile philanthropist, is selling soda pop-sized cans of air, purportedly from far-flung, pristine regions of China such as Xinjiang in the northwest to Taiwan, the southeast coast. He says 10 million cans have sold in the last 10 days as pollution levels climb to record highs.
'I want to tell mayors, county chiefs and heads of big companies: don't just chase GDP growth, don't chase the biggest profits at the expense of our children and grandchildren and at the cost of sacrificing our ecological environment', Chen said.

How to Make Bottled Air at Your Home