(324). Start a Toilet Paper Manufacturing Unit
Most of us can't imagine living without toilet paper. The average American uses over 100 single rolls—about 21,000 sheets—each year. It's used not only for bathroom hygiene, but for nose care, wiping up spills, removing makeup, and small bathroom cleaning chores. Manufacturers estimate that an average single roll lasts five days.
Toilet paper, paper towels, napkins, and facial tissues are sanitary papers, personal products that need to be clean and hygenic. They're made from various proportions of bleached kraft pulps with relatively little refining of the stock, rendering them soft, bulky, and absorbent. Sanitary papers are further distinguished from other papers in that they are creped, a process in which the paper is dried on a cylinder then scraped off with a metal blade, slightly crimping it. This softens the paper but makes it fairly weak, allowing it to disintegrate in water.
Toilet paper can be one-or two-ply, meaning that it's either a single sheet or two sheets placed back-to-back to make it builder and more absorbent. Color, scents, and embossing may also be added, but fragrances sometimes cause problems for consumers who are allergic to perfumes. The biggest difference between toilet papers is the distinction between virgin paper products, which are formed directly from chipped wood, and those made from recycled paper. Most toilet paper, however, whether virgin or recycled, is wrapped around recycled cardboard cylinders.

Before paper was widely available, a variety of materials were employed. The Romans used an L-shaped stick (like a hockey stick) made of wood or precious metal; at public toilets people used sponges on sticks that were kept in saltwater between uses. In arid climates, sand, powdered brick, or earth was used. Until the late nineteenth century, Muslims were advised to use three stones to clean up. One favorite tool was a mussel shell, used for centuries. Until the early twentieth century, corn cobs were used.
In the late fifteenth century, when paper became widely available, it began to replace other traditional materials. Sometimes old correspondence was pressed into service, as were pages from old books, magazines, newspapers, and catalogs. People also used old paper bags, envelopes, and other bits of scrap paper, which were cut into pieces and threaded onto a string that was kept in the privy.
Toilet paper is a fairly modern invention, making its debut around 1880 when it was developed by the British Perforated Paper Company. Made of a coarser paper than its modern incarnation, it was sold in boxes of individual squares. In America, the Scott Paper Company made its Waldorf brand toilet paper in rolls as early as 1890. The first rolls were not perforated, and lavatory dispensers had serrated teeth to cut the paper as needed. It was a nearly "unmentionable" product for years, and consumers were often embarrassed to ask for it by name or even be seen buying it. Timid shoppers simply asked for "Two, please," and the clerk presumably knew what they wanted. To keep things discreet, toilet paper was packaged and sold in brown paper wrappers.
During the 120 years since its introduction, toilet paper has changed little, although it's 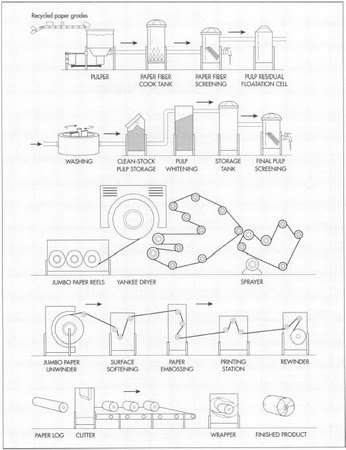 Toilet paper is generally made from new or "virgin" paper, using a combination of softwood and hardwood trees. Softwood trees such as Southern pines and Douglas firs have long fibers that wrap around each other; this gives paper strength. Hardwood trees like gum, maple and oak have shorter fibers that make a softer paper. Toilet paper is generally a combination of approximately 70% hardwood and 30% softwood.
Other materials used in manufacture include water, chemicals for breaking down the trees into usable fiber, and bleaches. Companies that make paper from recycled products use oxygen, ozone, sodium hydroxide, or peroxide to whiten the paper. Virgin-paper manufacturers, however, often use chlorine-based bleaches (chlorine dioxide), which have been identified as a threat to the environment.

Introduction
The toilet paper manufacturing business has been reported as being one of the fastest growing manufacturing industries in South Africa today. The local tissue paper manufacturing plants (jumbo rolls) are doubling and trebling their production to keep up with demand. An exceptional winner time and time again. We have had the privilege of setting up many successful rewinding operations throughout Africa. Most of the entrepreneurs purchase their second and third machines a few months into running their operations.
Benefits/Advantages
- Cash business (depending on market sector, this can be up to 100%).
- Ability of producing SABS approved toilet rolls.
- Simple manufacturing process.
- Easy administration (very few product lines and variations).
- High demand for product.
- Easy to market.
Related Available Machines: - Core Manufacturing
- Garage Wipes
- Kitchen Towels
- Facial Tissues
- Rest Room Towels
- Paper Serviettes
- Many more, please enquire

Toilet tissue made from recycled paper is made from both colored and white stock, with staples and pins removed. The paper goes into a huge vat called a pulper that combines it with hot water and detergents to turn it into a liquid slurry. The recycled pulp then goes through a series of screens and rinses to remove paper coatings and inks. The pulp is whitened somewhat and sanitized with oxygen-based products like peroxide. It then goes through steps 7 through 10 like virgin paper products, producing a cheaper, less-white paper.

Paper companies often maintain their own tree stands in order to ensure the quality of the paper they manufacture. The chemicals used in the pulping process are also carefully tested and monitored. Temperatures at which a slurry is cooked is ensured, too, by checking gauges, machinery, and processes. Completed paper may be tested for a variety of qualities, including stretch, opacity, moisture content, smoothness, and color.

The first waste product produced in the papermaking process, the bark removed from tree trunks, burns easily and is used to help power the paper mills. In addition, black liquor, the fluid removed from the pulp after cooking, is further evaporated to a thick combustible liquid that is also used to power the mill. This reduction process, in turn, yields a byproduct called tall oil that is widely used many household products. About 95% of the cooking chemicals are recovered and reused.
But other problems associated with the industry are less easily solved. The production of virgin toilet paper has spawned two current controversies: the destruction of trees, and the use of chlorine dioxide to bleach the paper. While virgin paper processing does necessitate the destruction of trees, they are a readily renewable resource and paper companies maintain large forests to feed their supply. Despite this, some activists have proposed that toilet paper be manufactured only from recycled products and suggest that consumers boycott toilet paper made of new materials.
These activists object to new paper processing because it often uses chlorine bleaching, which produces dioxins, a family of chemicals considered environmental hazards, as a byproduct. Paper and pulp mills are the primary producers of dioxins, and manufacturers must carefully assess their effluvia to counteract the emission of dioxins. Increasingly, virgin paper makers use alternative bleaching methods that substitute oxygen, peroxide, and sodium hydroxide for chlorine. Some simply reduce the amount of chlorine used in the process. Others experiment with cooking the wood chips longer, removing more lignin earlier in the process, which requires less bleach. Better pulp washing also removes more lignin, and reduces the amount of bleach needed for whitening.
Machine Manufacture
Diverse Group
Email: sales@diversegroup.co.za
http://www.diversegroup.co.za