What Wood Is a Cricket Bat Made Of?

The rules of cricket state that a cricket bat must be made of wood, and nearly all cricket bats are made from willow, specifically the Cricket-Bat Willow cultivar. This type of wood is used due to its strength, its light weight and its resistance to splintering. The trees are grown and harvested for use in the production of cricket bats, and the wood is fashioned either by hand or by machine into the classic paddle shape.

I am sure you have heard about the game of Cricket. Why? Because there is no other sport in India that fetches around 0.1 million people in one ground (Eden Garden, Kolkata) and millions of others on their TV sets, radios, Internet and other similar technical devices, having a religious following in the dynamics of what goes on the ground.
Apart from the bigger cities or towns, even if you travel through the country-side, you will notice that children love to play Cricket in the fields. Visit any small town-ship in any area of India and you will notice parents buying Cricket bats for their children, who have posed a serious and undeniable demand of it when they planned to visit the market.
It was during the year 1992 when I first hold a full-size bat in my hands: The manufacturer was Puma and I remember I was practicing playing left-handed trying to imitate Vinod Kambli. He had been hitting double centuries and his Lara-like stance was a treat to the eyes; at least for new beginner of the game, who at that time had no inkling about what a stance means in real sense of the term. Later, I found the bat too heavy and resorted to the smaller ones so that I could play shots with strength available to my small arms. Though I later turned out to be a fast bowler during my college years, yet batting always had its charm, and so was the willow which when someone wields with a flair and audacity, one makes a sight to watch.
It is the pursuit of understanding the manufacturing of these willow-wands that made me to visit the manufacturing capital of Cricket Bats: Meerut, a city of Uttra Pradesh.

Wooden Cricket bases in a warehouse 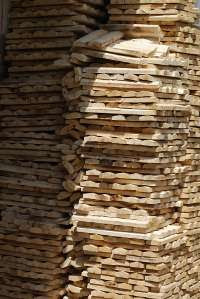 A cottage manufacturing unit--
Suraj Kund road in Meerut is the Mecca of Cricket bat manufacturers where almost every house has something to do with the process. Right from warehouses to sawmills, from skilled labor to finishing touches, people seemed working in a state that has nothing else to care about to make sure that the supply of Cricket bats never dips.

A bullock-cart transports wooden logs to the manufacturing unit in Meerut
I hired a rickshaw and ask him to take me to S. K. Road where sports manufacturers seem to live. There are many shops that sell, retail and wholesale, supply and export sports goods to various parts of India and foreign countries. A casual talk to a tea-vendor gave me the directions to move in the narrow lanes of Hanuman Puri where bats were manufactured in low-roofed and almost cottage-like houses.

Cricket bats placed to dry after material is applied to remove irregularities
While talking to Narayan–a Cricket bat manufacturer–I came to know that a single person is able to finish around 100 Cricket bats once they come to them after the handle has been fixed in the base. A lot of repair work is needed due to irregularities in the wood, which is done with stone-sand (marble grounded to powder form) and a strong adhesive. The adhesive layer takes time to get dried and then a lot of finishing is done. Once the final finish is gotten on the surface, stickers are pasted on them making them the branded-product of various manufacturers. (!) These small vendors then sell these bats to various shops in the city and also send them to various places like Delhi, Agra, etc.
Later on, I talked to many among these small-scale manufacturers who provided the understanding of various process through which a Cricket bat goes before finally coming out wrapped in a polythene packet ready to be sold. 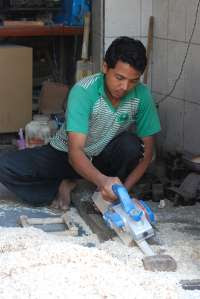 Finishing of a Cricket Bat
I talked to Abhishek, a past Times of India employee who now runs the family business of sports goods. He mentioned that their brand–Vishwa–was one of the most famous brand before partition. However, after partition, they lost the sheen and his ancestors had to almost restart the business before other took the major pie of it. He took me to their manufacturing unit and told about the whole process.
The raw wood that comes to the manufacturing unit is first dipped into water and pressed through a machine. This increases the density of the wood and strengthens it. It is left for drying for around a fortnight. Later, it is cut according to the standards to make the base of the bat, which will come in contact of the ball. At the one end of this base, a V-shape cut is made to accommodate one side of the handle. 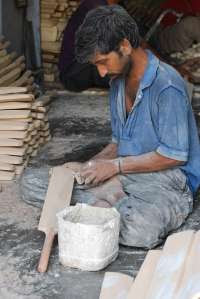 Filling stone-sand+adhesive to remove irregularities of wood
The Cricket bat has two parts: Base and the handle. Usually the length of the handle and the base is almost similar. While the base involves a single piece of wood, there is lot that goes in the manufacturing of a handle. Though handle is not meant to be in the contact of a ball, but it plays pivotal role in giving the push to the ball and keeping the hands of the batter shock-free or should I say current-free because if the bats are single-piece units, you will feel a shudder or current-like feeling in your hands when the ball hits it.
Now the handle is made of several pieces of cane, wood and rubber. The rubber is inserted in order to give the elasticity to the handle. Later on, cotton or nylon thread is wounded round the handle and then a rubber grip is mounted on it.

Cricket bat-handles--both sides shown
The handle has a V-shape side-view at one end and round at the other. This V-shaped end is inserted in the cut-section of the base and is supported with a clamp so that the adhesive applied to (industrial scale adhesive) could join them for bearing the impact of the ball.
Once this joining process is done, a lot of finishing processes are employed to give a smoother look and feel to the surface of the bats. Sandpaper finishing is done both by hands and through a machine also. Later on buffing is done. However, before the second buffing, some chemicals are put on the surface to get rid of final irregularities.

Material involved in the manufacturing of Cricket bat

The brownish wood is English willow and the whitish wood is Kashmiri willow
The Cricket bats are manufactured from mainly three types of woods: Poplar, Kashmiri Willow and English Willow. The poplar wood is locally available. Kashmiri willow comes from Kashmir and English Willow is shipped from London. Now, it is pretty clear that the cost of English Willow is more than other types of words. Poplar is used to manufacture bats that are to be played with softer balls; meaning for children and adolescents and not for serious or professional players. It was mentioned that the cost of English willow starts from where the cost of Kashmiri willow ends! 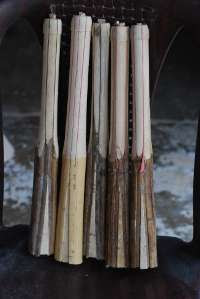 Various types of Cricket bat-handles (The brightest one is from Singapore)
The handle is manufactured from cane or bamboo. The best quality of cane comes from Singapore and is used for quality and professional Cricket bats. The handles are graded in plies, where every piece of the wood counts as one. A lot of impersonation can be done to reduce the price of the bat and make the manufacturing process fast.
Thread wounded on the handle could be of cotton or nylon.
Apart from this, stone-sand, adhesive, sandpaper, and some machines are involved in the whole process. A lot of manual labor is also involved in the total process of manufacturing.
Size of the Cricket bats
The length of the full-size Cricket bat was quoted to be 33.5″ and it is numbered as “7″. The size decreases by 1″ for each lower number. At the end, the “0″ number bat measured 26.5″. It seems that if the size is still less than this, the Cricket bat will be made in one piece–meaning there would be no separate insertion of a handle into the blade.
When the wood has not been cut to make the base, it is of around 5″ in width. When the base is cut, it remains of around 4.25″. The thickness of the base or blade, as it is known in professional terms, is usually 2-3″ with a varying degree of uniformity.
The business opportunity in manufacturing Cricket Bats

Finished and packed Cricket bats
Paratpur, Pallavpuram, Sports Complex and Industrial Area of Meerut are full of big-sized establishment or factories that manufacture Cricket Bats. If you have heard of SS, SG, and BDM brands, they all are manufactured here. However, there is no dearth of demand and supply for smaller manufacturers. Given that the demand of Cricket bats is increasing day by day, this is an area that entrepreneurs of other cities in India can tap.
Even if international players could not be the first target of sales, regional players or the domestic market could be tapped.
One thing that is crucial to any business is the supply of raw material apart from the manual labor. Now, the small manufacturers in Meerut are smart enough to make the cycle of various processes involved in manufacturing of Cricket bat. This ensures that even very small-level players can join in. Right from the warehouse that stores the wood, the cutter who gives the wood the shape of base, the business involves the finishers who take this un-cooked Cricket bat through various finishing and strengthening processes to make it appear beautiful and ready to be sold on shops.
So, if any entrepreneur wants to start the business of manufacturing Cricket bats, he/she needs to involve all these machines and processes in order to convert the simple piece of wood into a willow that a batter loves to wield.


Inside a cricket bat manufacturing workshop

Cricket bats are manufactured mainly from English willow, a kind of cultivated timber which grows in large plantations in wetland areas throughout Essex, Suffolk and Norfolk. Each tree is individually planted by hand and during its natural life-span, the willow will be tended by the grower to ensure that the tree will be suitable for bat making. For each willow that is felled, two new trees are planted. In this way the industry, countryside and the actual species are protected. 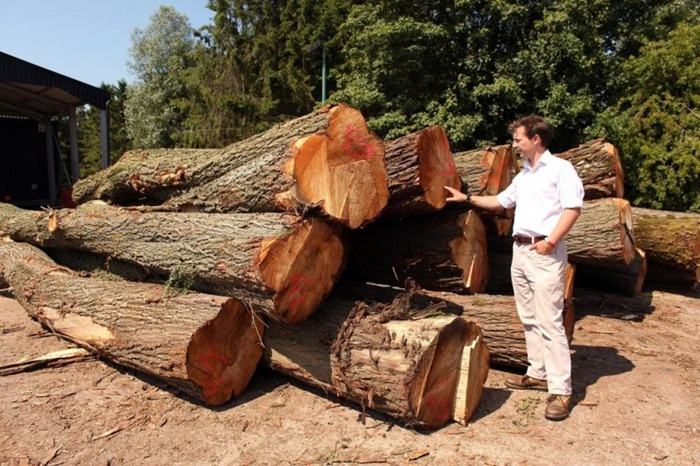 The willow cleft is then sawn, the ends waxed and then air or kiln dried to reduce the moisture content. The cleft then undergoes various machining processes to be cut into the basic blade shape. Once the blade has been correctly graded and machined, the next stage is pressing. The willow fibers have to be compressed in order to strengthen the timber sufficiently to withstand the impact of a cricket ball. The blade is pressed up to 2,000lb per square inch. 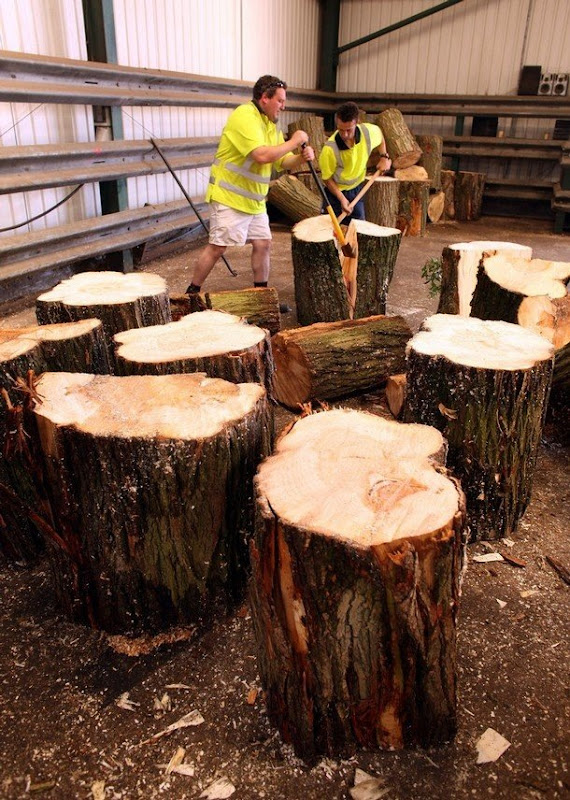 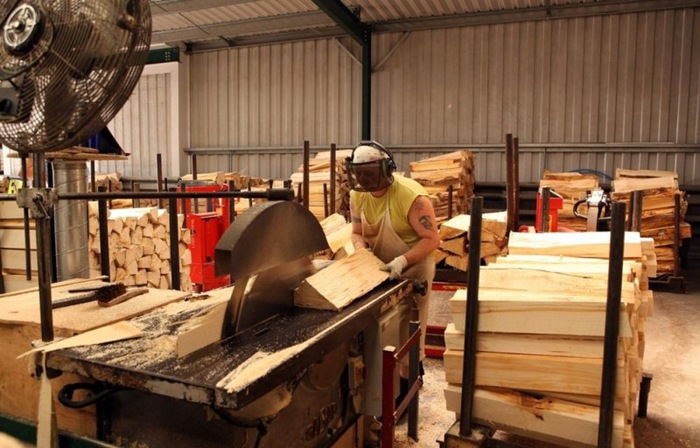 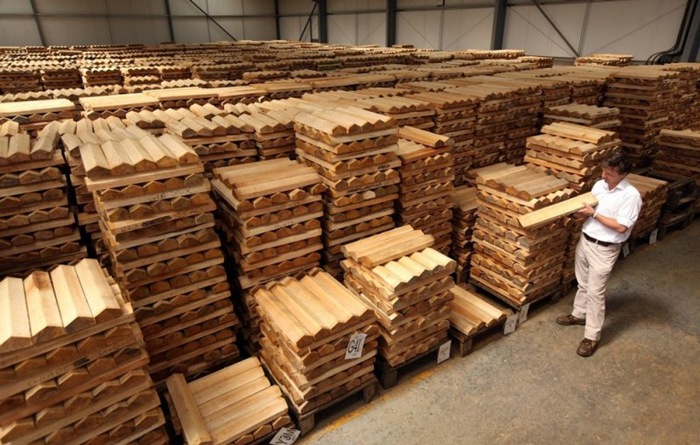 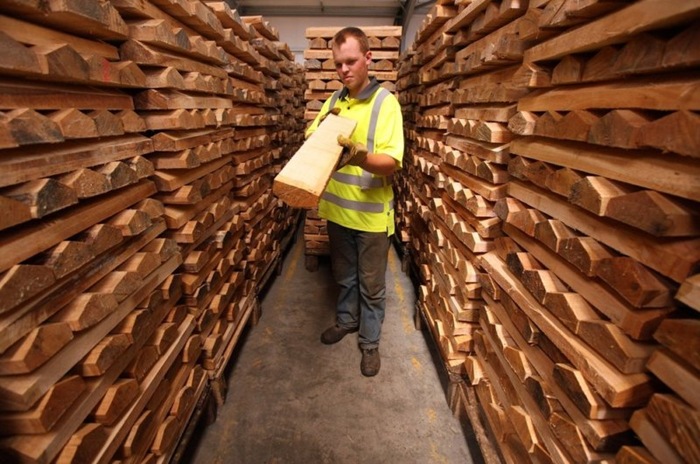 After pressing the handle, constructed from cane and rubber strips, is fitted through the precise splicing of the handle into the blade. The blade is now shaped with a draw knife. During the shaping process, the bat is constantly tested for balance and form by the bat maker. 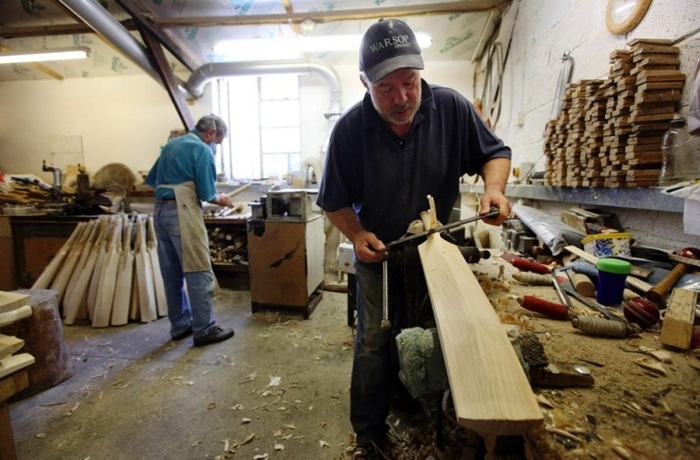 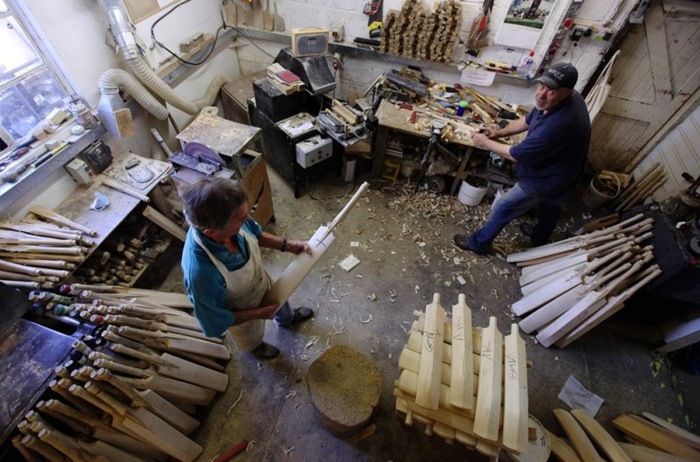 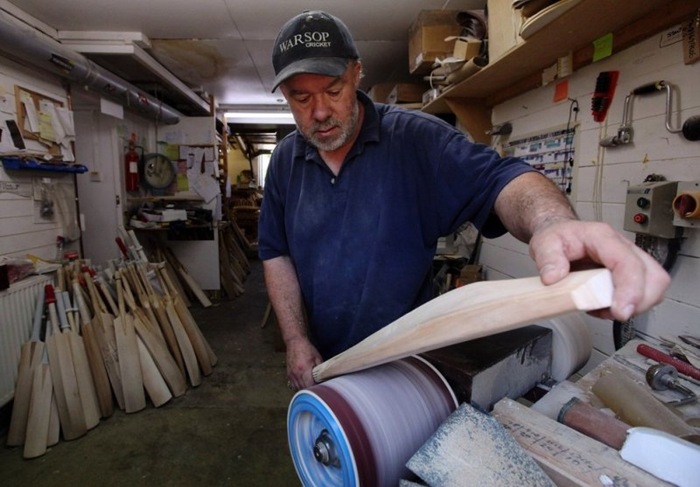 Next comes sanding. The bat will be both coarse and fine sanded through various drum and belt sanding machines.
Once the bat has been shaped and sanded, the handle and blade are blended together to obtain a seamless bat. Finally, the bat is waxed and polished, a rubber grip fitted to the handle and labeled. The bat is now ready to ship. 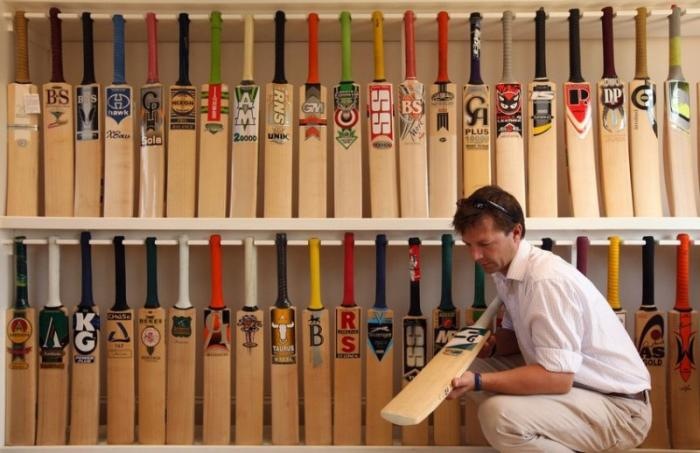