(226). Start a SERICULTURE (Silk) Production Unit
SERICULTURE INDUSTRY AND ITS POTENTIAL IN
SERICULTURE, the technique of silk production, is an agro-industry, playing an eminent role in the rural economy of . Silk-fibre is a protein produced from the silk-glands of silkworms.
Historically, sericulture was introduced for the first time, into by Hoshomin, the Queen of China. For a long time, sericulture was considered to be a national secret by the Chinese Government, and as an industry it was not known in other countries. Later, it was introduced into Europe and as well. According to reports available, sericulture was introduced into about 400 years back and the industry flourished as an agro-industry till 1857, with an annual production of two million pounds of silk fibre. The industry survived the onslaught of the Pebrine disease during the period from 1857 to 1895. However, after 1928, the sericulture industry showed a decline in its production owing to the fierce competition from advanced sericulture countries, such as , and European countries. After the , the industry is flourishing as an agro-industry, giving employment to over 3.5 million people in the Country.
The annual production of silk in the world is estimated at 45,000 tonnes of which and contribute 18,936 and 13,200 tonnes respectively. , and are the  other leading sericultural countries in the world. The industry has survived the stiff competition with the man-made fibres and it is now estimated by the Food and Agriculture Organisation of the United Nations that the total requirement of silk by 1980 would be of the order of 80,000 tonnes, leaving a demand of 35,000 tonnes. Japan, which is the premier silk-producing country, owing to its recent industrialisation, high cost of labour and the shortage of land available foe mulberry cultivation, has its limitations in increasing its production. Further, owing to heavy internal consumption, has become an importer of silk, thus widening the gap between production and demand. This situation has given a boost to the sericulture industry in the developing countries, e.g.India and .
Among the developing countries, enjoys a very favourable position for doubling the present status of of silk porduction of 2,969 tonnes owing to the low cost of labour. sericulture is ideally suited for improving the rural economy of the country, as it is practised as a subsidiary industry to agriculture. Recent research has also shown that sericulture can be developed as a highly rewarding agro-industry.
BACKGROUND OF THE INDUSTRY 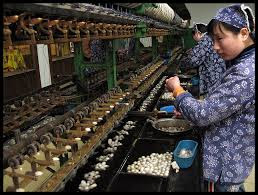 In developing countries, e.g.India, agriculture and agro-based industries play a vital role in the improvement of rural economy.The limited availability of land, the limited cash returns, and agriculture being confined to one or two seasons in the year, have made villages to look for supporting rural industries, such as sericulture. Agriculture and sericulture are adopted simultaneously by the agriculturists in regions where the ecological conditions are favourable. In , over three million people are employed in various fields of sericulture. It is a cottage industry and provides ample work for the womenfolk in the rural areas in rearing silk worms, while the male members work in the fields. Recently the enforcing of new ideas by research institutions both in mulberry cultivation and silk-worm-handling among sericulturists, the industry is now practised as a main profession and as a major cash crop, of the country.
Five varieties of silk worms are reared in for producing this natural fibre. Bombyx mori, the silk worm, feeds on the leaves of Morus to produce the best quality of fibre among the different varieties of silk produced in the country. Antherea assama is confined to only Brahmaputra Valley of India in the world.It produces the famous mugasilk.Tasar silk is a product of Antherea mylitta, which feeds on Terminalia tomentosa grown in the thick jungles of , Madhya Pradesh and Orissa. The recent introduction of Antherea royeli and Antherea perniyi has enabled the country to produce the oak tasar silk, Phylosamia ricini, the eri silkworm, which feeds on Ricinus communis, is raised in and Orissa commercially.
Of the total production of 2,969 tonnes of silk in , as much as 2,445 tonnes is produced by the mulberry silkworms,Bombyx mori.
Mulberry silk is produced extensively in the states of Karnataka, West Bengal and . About 85 per cent of the country's production is contributed by the Karnataka state by rearing multivoltine hybrids of silkworm and this activity enables the sericulturists to harvest five to six crops a year. , owing to its salubrious climate during autumn and spring, is producing silk by rearing univoltine silkworms. Other states, namely, Andhra pradesh, , Tamil Nadu, Uttar Pradesh,Himachal Pradesh and Punjab, contribute roughly 1.8 percent to the total production of mulberry silk in wise silk production in the country is given in Table 1.
Tasar silkworms are reared traditionally by the tribal people of Madhya Pradesh,, Orissa. These 3 states mainly contribute to the production of tasar silk in the country. The recent rearing of Antherea royeli & Antherea perniyi has enabled the country to produce the oak tasar silk in the sub-Himalayan belt & in Manipur.
Muga silk is grown exclusively in & it is still considered to be a ceremonial dress by the local population.
produces as much as 90% of eri silk in the country by rearing eri silkworms on castor leaves.

The systematic cultivation of mulberry, the food plant of Bombyx mori, is the first step in the production of mulberry silk. The total area under mulberry in India is 1,20,567 hectares, of which only 28,781 hectares is irrigated Whereas, mulberry is raised as a bush plantation in Karnataka & West Bengal, it is grown as trees in Jammu & Kashmir. Four Indian species of Morus, namely Morus alba, M.indica, M. serrata & M. laevigata, are raised as main food plants of silkworms.

The propagation of mulberry in Karnataka & west is through vegetative propagation, whereas root-grafting & bud-grafting are practised in the hilly areas of Jammu & Kashmir & Uttar Pradesh. Considering the ecological conditions, such as rainfall & the nature of soil, different systems of plantations for raising mulberry are practised in India.In the rain-fed areas,mulberry is planted at a distance of 7.6*7.6 cm whereas under irrigation the spacing of 5 cm* 5cm & the row system ( 4 cm between rows & 15 cm between plants) are followed. In , a modified system of row plantation, popularly called 'Malda System' is practised even under rainfed conditions, because of the rich soil & heavy rainfall.Recently, tree plantation have ben introduced into Jammu & Kashmir.
The cost of producing mulberry has a direct impact on the cost of producing cocoons, as nearly 605 of the total cost of production of cocoons goes to the production of mulberry leaves.
Experiments conducted in the moriculture divisions of the research institutions to evolve new varieties of mulberry & improved methods of cultivation have shown that over 30,000 kg of quality leaf can be produced per annum at competitive costs against 15,000 kg by adopting the traditional methods under irrigation. Many high-yielding varieties have been introduced into the country, & they not only double the leaf yield, but also maintain the succulence of the leaves, a factor which is very important under tropical conditions. 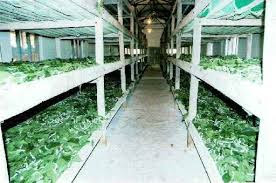 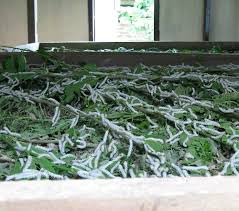 In India(Karnataka state), where the temperature ranges from 16-31 degree centigrade, enjoys favourable climatic conditions for rearing the silkworm Bombyx mori throughout the year, whereas in West Bengal, the multivoltine silk-worm rearing is practised even under adverse conditions of temperature. In Jammu & Kashmir, the rearing of silkworms is practised once a year during May-June.
Of a life span of 50 days of B.mori, the egg stage lasts 10 days, the larval stage lasts longest-25-30 days. The pupa stage takes 10 days. The silkworm pass 4 moults during growth. The total quality of leaf required to raise a unit of 40,000 larvae(100 dfls) is 500-600 kg by using the traditional methods. The silkworms consume as much as 95% of the food after the third & fourth moults. At the end of the larval duration, the silkworm emits silk from its mouth & constructs a cocoon on a scaffolding. The cocoons produced by hybrids are used for extracting the silk fibre. For preparing the hybrid silkworm eggs, pure races of silkworms are raised in seperate areas. The cocoons are preserved properly in the egg-producing factories, popularly called silkworm grainages. the moths are allowed to emerge. The selected combination of moths are allowed to copulate for 4 hrs. The male after the first copulation is either rejected or used for copulating with another female. Later, the female is consigned to a dark plastic 'cellule'. She lays about 400 eggs in 24 hours. At the end of 24 hours, the female is crushed & examined for hereditary diseases. Only certified disease-free hybrid eggs are reared for industrial silk production.
Considering the various factors, such as the place of origin,voltinism, the colour of the cocoons, the larval markings, the colour ,shape & size of cocoons,the silkworms are classified into different breeds. The multivoltine races & their hybrids are reared in West Bengal & Karnataka. Owing to the non-diapausing of the eggs & the copious growth of the mulberry, these breeds can be reared six times & the cocoons are harvested after 2 months. These multivoltine hybrids have a short larval duration & are generally poor yielders of cocoons. Bivoltines, because of the interruption of diapause, can have only 2 life-cycles a year. However, its possible to break the diapause artificially by treating 1-day old eggs in Hydrochloric acid of 1.064 specific gravity at 46.1 degree centigrade. By adopting this technique, it is possible to take more than 4 crops in a year. Univoltines & bivoltines require more leaves than multivoltines. However, the yield & quality of the cocoons are superior to those of multivoltines. The multivoltine silkworms yield about 25 kg of cocoons per 40,000 eggs reared, whereas the bivoltines yield 40 kgs. The average annual yield of cocoons in is as low as 150 kg under rainfed conditions, & under irrigated conditions, it is about 400 kg. 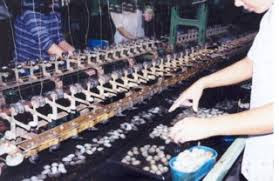 The cocoons are cooked in hot water & the silk fibre is unwound from the cocoons.This process is called 'reeling'.
The silk consists of two proteins, the inner core of fibroin & an outer cover of gum sericin. During reeling, the cocoons are processed in hot water at 95-97 degree centigrade for 10-15 minutes. This process is called cooking. This cooking will enable the sericin portion to get softened & make unwinding easy without breaks. The cocoons after cooking are reeled in hot water in different types of machines. In , 61 percent of the silk amounting to 1,320 tonnes is reeled on the country-type charka numbering 6,656. The silk produced with the country charka is of very poor quality, as the thread is not uniform, as it carries many slubs etc. The improved cottage-type basins have been introduced recently into . Provision for button-holes & a proper croisure system to maintain the thickness of the fibre, & to control the defects of neatness in the cottage basin have facilitated the production of better-quality silk. As  much as 806 tonnes of silk is produced by 4000 cottage basins in the country.
Large-scale basins organised scientifically are arranged in filatures for the extraction of superior quality fibre. The silk produced by the filatures is superior because of the low level of defects of cleanliness & uniformity in the thickness of the fibre. Only 8% of the total production of silk in is contributed by filatures.
The silk produced from the multivoltine races of silkworms is poor in quality & is known to have greater defects, such as lousiness, & defects in neatness & cleanliness & is of very poor quality in light of the international D grade. The silk produced by the bivoltine races of silkworms possesses superior neatness & cleanliness, is without lousiness & has high tensile strength & stands to the international A grade.
The new technology of handling silkworms in the country has shown that bivoltine silkworms, producing the international quality of silk, can be produced throughout the year in the Karnataka state in . It has been shown that, on an average, 30-35 kg of cocoons, yielding 3-4 kg of high grade silk can be produced by rearing 40,000 eggs of bivoltines, as compared with 25 kg of cocoons & 1.4 kg of low-quality fibre from multivoltines. 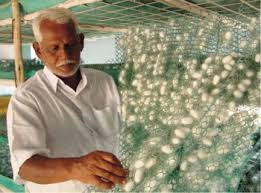