November 02, 2011
(178) Start a Brain Entrainment or Synchronization Business
Isochronic tones are used in brain entrainment. When a single isochronic tone is repeated rapidly and a pause of silence follows each pulse, the brain produces a similar frequency. Isochronic tones can change a person’s mood, affect a person’s physical attributes, and produce effects such as lucid dreaming, out-of-body experiences, or hypnosis. Isochronic tones are similar to binaural and monaural beats but differ because they do not change.
How Brain Entrainment Works
Brain entrainment is a relatively new field of study that involves frequency production in the brain. When the brain is exposed to a repeating beat, tone, or other frequency, it mimics the frequency by producing its own. This frequency can be measured in Hertz, or cycles per second, and has a direct impact on the subject’s mood, energy levels, and state of consciousness. By varying the frequency or intensity of the sounds that are used, a person using a brain entrainment technique produces various effects. Applications
Isochronic tones are used in brainwave entrainment in order to artificially produce a state of consciousness. The idea behind brainwave entrainment is that every mood and every consequent action is directly related to a corresponding frequency range. By using isochronic tones and binaural/monaural beats, an ideal frequency range can be produced at will.
Isochronic Tones vs Binaural and Monaural Beats
Isochronic tones are generally considered more advantageous than binaural and monaural beats because they clearly distinguish between the tone and periods of silence. This makes it easier for the brain to entrain to the tone. Binaural beats, which produce a frequency in the brain that is equivalent to the difference in frequencies of a primary beat and a secondary beat, are said to be better for lower frequencies. Monaural beats are similar to binaural beats but consist of two waves that have already been mixed together and do not require the brain to calculate the difference. This allows monaural beats to be played through speakers while binaural beats must be heard through headphones.
The secret of brain wave entrainment using sound is by using binaural beats (I'll discuss binaural beats in detail in the next chapter but I’ll briefly cover the main points here). They’re quite easy to replicate on audio CDs and even on the pc itself. That’s why Binaural Beats are one of the most popular techniques used in self-help audio CDs. Binaural beats occur when you listen to two carrier tones of slightly different frequencies in each ear. Say, for example, you listen to a frequency tone of 300 Hz in the left ear only, and project another tone of 310 Hz into the right ear. As a result, your brain combines these two tones into a single tone (the scientific term is "amplitude modulated standing wave") of 10 Hz. What happens is that you’ll hear a single pulsing tone of 10 Hz that has a "wah-wah" sound and rhythm. Actually, you can only "hear" these binaural beats in your mind only. Binaural beats are sub-sonic sounds (Another scientific word for "below the level of human hearing". The human ear can only hear sounds between about 20 Hz to 20,000 Hz.). The binaural beats are only "perceived" in your mind and not actually heard. I mean, obviously you can’t hear a tone with a frequency of only 10 Hz, right?


COOL EXPERIMENT...
By changing the frequency difference between the two tones, you’ll be able to choose which brain wave frequency you want to entrain to. This enables you to change your brain wave state from Beta to Alpha (7-14 Hz), Theta (3.5-7 Hz) or even a combination of brainwave patterns. Usually, the binaural beats in self-help products are "hidden" or "masked" behind another sound wave, usually the sound of ocean waves, rain-drops, other sounds of nature or new age music. This makes it a lot more pleasant to hear (Check out the Beginner's Tip below & you'll understand why...)
BEGINNER’S TIP
One of the best brainwave entrainment programs around is the Holosync program by the Centerpointe Research Institute. If you're interested, sign up for a FR-EE Holosync demo CD here. I've also written a review onHolosync, so do check it out if you're interested in my experience using this product.

In the early 1940s, scientific researchers discovered that repetitive light and sound frequencies can directly affect your mind resulting in brain wave entrainment. Their subject’s brain waves would naturally follow and entrain itself to the underlying frequency of the external stimuli, either a flickering light or sound frequency. Psychologists, researchers and hypnotists have used this knowledge to put their clients into a deep relaxed, peaceful and trance-like state. It wasn't long before someone decided to commercialize this knowledge. In 1958, a researcher named Sidney Schneider developed the first Brain Wave Synchronizer. Today, they're more commonly known as Mind Machines or Light & Sound Machines. You can easily buy these Light & Sound Machines from self help companies. People who’ve used Light & Sound machines for brainwave entrainment have told me that they were able to quickly get into a very deep, relaxed and peaceful state, much faster than using just self help audio products. Frankly, I’m not surprised. Many people are visually-oriented (meaning that they rely more on their sight than their other senses) so a series of flickering lights & sound at the same time should be able to quickly put them into the desired brain wave state. However, Light & Sound machines aren’t for everyone. The use of these flickering lights can cause epilepsy or seizure in some people. If you have any history of anything like that, you should consult your physician first before using light & sound machines.
The Light Center was created as a place where people could come to pray and meditate anytime, any day of the year. It is dedicated to prayer for personal and planetary transformation.” – Light Center website The Light Center in Black Mountain, NC. Getting there involved going off the beaten path but the signs were clear and I enjoyed driving through the scenic countryside.

“The Light Center was created as a place where people could come to pray and meditate anytime, any day of the year. It is dedicated to prayer for personal and planetary transformation.” – Light Center website

The Light Center is an unusual building with a windowed Geodesic domed roof. I arrived with my friend and we took a couple of minutes to admire the exterior.
Upon entering, we were greeted by the host and asked if we wanted to experience the Light Room. We nodded in agreement and entered a smallish circular room with colored lights around the upper circumference of the room.

According to the Light Center: “The frequency of color brings about balance and harmony in the physical body. This enables the individual to concentrate on prayer and meditation.” The room had about 10 reddish-orange seats that looked like they were designed for a sci-fi movie. The host gently shut the door and a few seconds later some ethereal synthesized music (composed by Richard Shulman) drifted from the speakers followed by the lights changing colors. The program lasted about 30 minutes with the synchronized music and lights cycling through the colors of the rainbow.
Initially, I was a little disappointed as I was expecting a giant Mind Machine with flickering lights (see Earlier Post).
However, I just closed my eyes and drifted into the moment. I can’t say it was life changing but it was very peaceful and relaxing. Next, we ascended a small winding staircase which opened into a purple carpeted room with a Geodesic roof. It was very quiet with dapples of sunlight hitting the the floor. We rested for half an hour enjoying the silence and then casually made our way to the Labyrinth outside.
Essentially, the The Labyrinth is used as a meditative tool where you follow the path to the center and then follow it back to the entrance. Walking the turning path helps keep your focus in the present moment thus quieting your mind.I walked it a couple of times and almost forgot about the outside world until the chatter in my head took over.
We ended our visit with a peaceful stroll around a secluded pond. I can pretty much guarantee that if you come here feeling stressed and anxious you will leave in a calmer, peaceful state. I know I left feeling relaxed and little happier for the experience.
Light & Sound (Mind Machines) 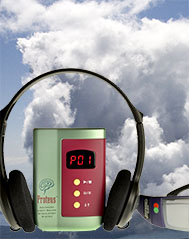 MindPlace has been designing and building Light & Sound (Mind Machines) since 1988. Whether you are a serious explorer of states of consciousness or just wish to experience a deeper level of tranquility, chances are our best selling PROTEUS light and sound system (?Mind Machine?) will help you achieve this and much more. PROTEUS comes with 50 sessions preinstalled ? most people find this is more than enough; however PROTEUS is programmable with a 199 session capacity. You can create and download your own sessions using our free Proteus Editor software, and its operating system can also be updated. Proteus can produce binaural beats and other audio waveforms, and you can even create your own using the free Proteus Editor software. It's the first light and sound system to use two colors (red and green), for a richer range of visual imagery than ever before. Package includes: Console, Ganzframes, headphones, patch cord, serial RS-232 cable (DV9), AudioStrobe sampler CD. Proteus Editor Software (available via download from the MindPlace Support site). Comes with US Power Supply. Note: System requires 3 x AA alkaline batteries, not included. 2 year manufacturer's warranty on electronic console.