(187). Start a TOY/GAME LIBRARY
Has such an idea ever crossed your mind? If not earlier, now is the time to give such an endeavour a thought. We’ve heard of book libraries, where anybody can walk in, pay up some amount, pick up a book or magazine or any printed work of his/her choice and have a nice time thereafter. This is precisely what happens in the library we are talking about too. Only it’s going to be more fun, more entertainment and our target is mainly children. (Of course adults are allowed) CAN?
Anyone and everyone can set up a toy/game library. What is needed is the basic conviction, backed by commitment as well as resources. A proper vision, enabling one to look beyond the immediate and visualise the needs of the distant tomorrow, is an added prerequisite.
Small-time entrepreneurs keen on making worthwhile investments, housewives eager to spend their time usefully, social workers wanting to spread goodwill around and those who can spare a mobile van to make an extra buck –all these can set up a toy library or at least a play centre.
THE MODUS OPERANDI
Here is the game plan for a modest toy/game library to suit the Indian conditions (The infrastructure needs have been deliberately pegged down. Hence it is inadvisable to attempt any further cutbacks.):
INVESTMENT: Toys … … … … Rs. 10,000
PERSONNEL: 6-7 dedicated volunteers.
The WOrking
The modus operandi is quite uncomplicated. Anyone capable of running a book library can run a toy/game as well after acquiring some additional skills. The vital difference is that a toy/game library is, by concept, less commercial in its approach.
Once a week (or more often if you can handle the task) children can come and play, pick up a toy or game of their choice, and take it home, preferably for a week. While breakage would entail paying damages, those who handle them with care may be offered some incentives.
The capacity would, naturally, depend on the size. The one envisaged above can cater to the needs of around 150 children – 75 in the 3-6 age group, another 75 in the 6-12 age group. Entrance fee can be in the range of Rs. 5-10, monthly fee fixed at Rs. 15-25, along with a safety deposit (to cover damage to toys/games) of around Rs. 150-200.
THE BENEFITS
For the child this provides the opportunity of playing around 12 different games in about three months, playing tried and tested games rather than risk disappointment while making a wild choice from a toy/game shop. What is more vital, he/she has the option of picking the right choice if he/she wants to buy one only after falling in love with it.
For the parents/guardians this marks the end of the hassle of keeping the child meaningfully engaged and the headache of which toy/game to buy and the dilemma of what to do with the toy/game if the child becomes bored with it.
For the toy/game industry (that includes plastic and other allied industries also), here are permanent outlets, which can, not only sustain them, but act as incentives to innovative manufactures.
For job seekers here is the ideal means of earning a modest and decent income, more so if it is only a part-time passion. 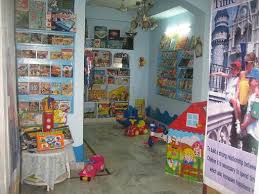 CHILDREN TOY FOUNDATION
Children Toy Foundation helps those aspiring to set up a toy/game library by guiding them from the moment of conception till the moment of delivery. To begin with, it provides seasoned advice on what to buy, where to buy and how to buy. It acts as a go-between – between the manufacturer and buyer of toys/games, ensuring the former, proper appreciation and reasonable profit, and the latter, the best value for money.
In Stage 2, the Foundation provides necessary training to a core group of volunteers or regular professionals, teaching them how to run the library in the best possible manner. It also helps out in repairing and replacing damaged toys/games wherever possible and feasible.
The Foundation considers it a moral responsibility to not only deliver a toy/game library or play centre, but also place them on a sound footing. In the bargain, if and when it is necessary and possible, it lends a helping hand in raising funds for an up-coming toy/game library/play centre from individual philanthropists, charitable trusts, social welfare organisations, so on.
If you cannot afford a full-fledged toy/game library, don’t worry. With modest investment, you can set up at least a play centre, which will turn into a regular library in the normal course – when the time is ripe. The marked difference lies in that a play centre does not let a child carry home any toy/game. In fact, the experience of Children Toy Foundation over the years has shown that a play centre is immensely suited to institutions like civic schools, which ail from chronic funds crunch under the Indian conditions. In fact, the Foundation’s ambition is to set up a play centre in every civic school in the country.