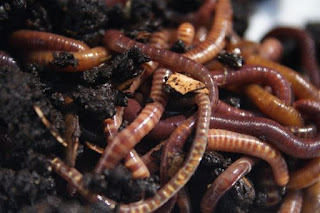 Vermicompost is the product or process of composting utilizing various species of worms, usually red wigglers, white worms, and earthworms to create a heterogeneous mixture of decomposing vegetable or food waste, bedding materials, and vermicast. Vermicast, similarly known as worm castings, worm humus or worm manure, is the end-product of the breakdown of organic matter by a species of earthworm.
Containing water-soluble nutrients, vermicompost is an excellent, nutrient-rich organic fertilizer and soil conditioner.The process of producing vermicompost is called vermicomposting.
ethods 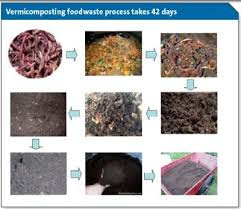 There are two main methods of large-scale vermiculture. Some systems use a windrow, which consists of bedding materials for the earthworms to live in and acts as a large bin; organic material is added to it. Although the windrow has no physical barriers to prevent worms from escaping, in theory they should not due to an abundance of organic matter for them to feed on. Often windrows are used on a concrete surface to prevent predators from gaining access to the worm population
The second type of large-scale vermicomposting system is the raised bed or flow-through system. Here the worms are fed an inch of "worm chow" across the top of the bed, and an inch of castings are harvested from below by pulling a breaker bar across the large mesh screen which forms the base of the bed.
Harvesting
Vermicompost is ready for harvest when it contains few-to-no scraps of uneaten food or bedding. There are several methods of harvesting from small-scale systems: "dump and hand sort", "let the worms do the sorting", "alternate containers" and "divide and dump." These differ on the amount of time and labor involved and whether the vermicomposter wants to save as many worms as possible from being trapped in the harvested compost.
While harvesting, it's also a good idea to try to pick out as many eggs/cocoons as possible and return them to the bin. Eggs are small, lemon-shaped yellowish objects that can usually be seen pretty easily with the naked eye and picked out.
Benefits
Soil

If you want to start a Vermicompost Making Business, you can take a training from either